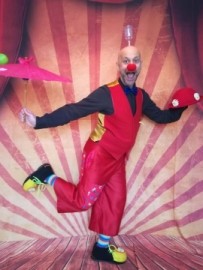 You might have been to a real-life circus, but you have certainly never been to our Webcam Circus, a small scale interactive circus show with an international flair where animals, magicians and clowns are just at your fingertips behind a computer screen....
: 0784743XXXX Click here to reveal
full number

When contacting this member, please state that you are viewing their Entertainers Worldwide profile.
Request a Quote
Share this Page:
Profile Views: 1084
Report this profile

You might have been to a real-life circus, but you have certainly never been to our Webcam Circus, a small scale interactive circus show with an international flair where animals, magicians and clowns are just at your fingertips behind a computer screen.
As ringmaster Monsieur Loyal illustrates the best tricks and acts that made the history of circus as we know it, using old and brand new real footage, his nephew Clown Ninetto keeps the audience digitally engaged with improbable jugglery acts,
unforgettable drama games and more interactive activities for families and beyond.
The show is av ... ailable in English, French and Italian

Tonino Scalia is an Edinburgh based French-Italian performer specialized in physical theatre, mime and theatre/entertainment for young audiences.
Tonino trained at Paolo Grassi Drama School in Milan, and studied clownerie with Vladimir Olshansky, Leris Colombaioni and Nola Rae.
He has worked with outstanding theatre makers like Mamadou Dioume, Maurizio Scaparro and is a member of Rome-based Oltre la Scena magic company alongside DISGUIDO. Since moving to Edinburgh in 2015, he has also founded the École de Théâtre français à Édimbourg.

I have been working as comedian and children entertainer since 1994 performing mainly clowning shows in many different situations to both children and families, at birthday parties, galas, street festivals and theatre.
In 2001 with Maurizio Mancini,I created the “Musicalclowns” . The duo performed in several shows for the town halls of Rome and other towns in Lazio In 2004 Leris Colombaioni directed “Le parodie di Ninetto e Rataplan” for the Musicalclowns. And in 2005 I performed my first clowning one-man-show, “Ninetto Show”.
In 2006 I directed “Le Petit Prince” by Saint ... Exupéry for "il teatro dell'aplauso" (Rome).
In 2008 I wrote and performed a clowning/mime play "Fleur" together with the pianist Anna Laura Longo. The show was produced by "la compagnia dei Varii" and directed by Sandro Mabellini.
Then I have moved to UK where I did various clowning shows and collaborate with Table Top Circus. In July 2015 I moved to Edinburgh where I worked in the entertainment industry and opened a drama school.
In 2020 I have created a online family show called "the Webcam Circus Show"

I have created a one of a kind interactive online family show performed on a conferencing platform.
The show is perfect for corporate clients and private events and there is an English, French and Italian version of it.

For a full description please look up at my profile and service.