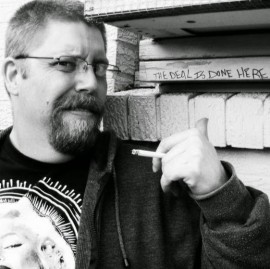 (no reviews)5.0
Country: United States
Based In: Ohio
Performs: Worldwide
From: $100

I'm a triple threat! I am an ordained minister, professional truck driver and a professional comedian!
: 419 271 XXXX Click here to reveal
full number

When contacting this member, please state that you are viewing their Entertainers Worldwide profile.
Request a Quote
Share this Page:
Profile Views: 375
Report this profile

I do observational material as well as impressions.

I started performing stand up comedy on tarmacs of shippers and receivers where I would pick up or deliver freight for other drivers who were bored sitting in their trucks like me.
I have also been the master of ceremonies for many benefits, comedy shows and open mics.
I have written, produced and hosted my own podcast "The Bowling Nun Circus".
I have opened for "The Disgruntled Clown", "Whitey Morgan and The 78's" as well as "Downtown" Tony Brown.

I have performed on a semi trailer in a field to actual comedy clubs, theatres and bars.