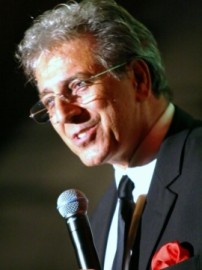 I have been a comedian for many years, headlined Atlantic City, Vegas .
Request a Quote
Share this Page:
Profile Views: 2492
Report this profile

Known as “Mr. Laughs,” Sal Richards is an accomplished comedian and actor with a long lasting entertainment career. With this career came critical acclaim and many significant honors, including being voted the “Entertainment Industry’s Hot Comic” by the prestigious New York Friars Club and “Entertainer of the Year in Atlantic City.” Sal is no stranger to Atlantic City as he has headlined every major venue in AC over the past 15 years. He has also appeared In Las Vegas, and many venues across the country.
The New York Daily News calls Sal Richards, “One of The Funniest Guys i ... n Show Biz!” Cindy Adams of the New York Post said, “Sal Richards Is Hilarious, a Must See!” Edward Jason of the Village Crier said, “Once you have seen Sal Richards, he’s sure to be one of your favorite performers, he’s pure fun.”
Sal’s documentary about his life “Mr. Laughs, A Look behind the Curtain” won six awards for Best Documentary in film festivals around the country. His autobiography “Behind the Laughter, Hidden Tears” was also acclaimed by critics.
Brooklyn-born Sal Richards has appeared in such films as Rounders, Out for Justice, Fighting Back, and Love Is All There Is. He has also appeared in television on The Sopranos, Law and Order: Criminal Intent, The Fugitive, and Deadline. Most recently Sal Starred in the Award winning Movie “Gus” Written and directed by Joe Pomarico, a true story of the bonding between a grandfather and Grandson.
Also co-starred with Vincent D’Onfrio (Criminal Intent) in Crackers, Which won Best Picture at The Fort Meyers Beach Film Festival in 2013. Written by award winning director Gregory Principato, who also produced and directed the Documentary “Mr. Laughs ….A Look behind the Curtain.”
Above all, Sal Richards loves to make people laugh which is his first love. “Laugh Till It Hurts” with Sal Richards.
www.salrichards.com

Headlined in Atlantic City for the past 15 years, also headlined in Las Vegas.
I have done many corporate dates throughout the country, and have appeared at many venue's including dinner theater, nightclubs and many theaters in the USA.

I have liabilty insurance

Behind The Laughter, Hidden Tears


Book Review Behind The Laughter, Hidden Tears is the autobiography of Sal Richards, an entertainer, actor and comedian. He reveals how tears can be hidden behind laughter. From a young age his dream was to entertain. When he left school, he found mediocre jobs to pay the bills as he worked toward a career in the entertainment world. He managed to survive the business for fifty years. He shares the goodness of his marriage, which is still strong today. He also shares the hard times, such as the death of their first born at birth and his second son at the age of 21, and the struggle of dealing with a son’s drug addiction. He and his wife have faced things that have destroyed many marriages. With determination and a love for his wife and family, they pulled together and faced the tragedies. He shares the struggles of his career choice and tales of those he worked with. The pictorial section of this book brings this family to life on the pages. You can see the love shining on his face, love for his family and his career. He held tightly to the motto: “The Show Must Go On.” Even when his body was broken and he had tears inside, he hid it with laughter. This is a small book with very short chapters that can be read in one sitting. It’s a very enjoyable read that goes to show you can triumph over tragedy and keep on going.