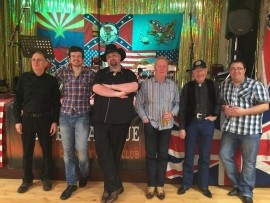 A 6-piece Southern UK based Country music band - Referenced as one of the best on the circuit!
: 0759067XXXX Click here to reveal
full number

When contacting this member, please state that you are viewing their Entertainers Worldwide profile.
Request a Quote
Share this Page:
Profile Views: 701
Report this profile

The Chris Dunne band are a 6 piece country band located in Surrey and Berkshire. We travel all around the UK playing American country music incorporating older style country and western music all the way up to modern country music.
Southern Country Magazine's Band of the Year 2017 and 3 time award winner of Flights CMC band of the year (the only band ever to win this on more than 1 consecutive occasion)

Working Man Blues
I'm Ready
Just Because
Rough Around The Edges
Willin'
You Never Can Tell
Brow Eyed Girl
Liza Jane
Proud Mary
Wild Side of Life
Some Days You Gotta Dance
Friends In Low Places
Toes
When You Say Nothing At All
Beer In Mexico
From A Jack To A King
Mercury Blues
Peaceful Easy Feeling
Sweet Home Alabama
Chattahoochee
Jambalaya
Put A Girl In It
Good Directions
Boot Scootin' Boogie
Margheritaville
Play Something Country
Ain't Goin' Down Til' The Sun Comes Up
Achy Breaky Heart
King of the Road
It's Five O'Clock Somewhere
Dance The Night Away Medley
He ... Stopped Loving Her Today
Sweet Annie
The Dance
Country Roads
Neon Moon
Amazed
Today I Started Loving You Again
Coward of the County
Lucille
Rhinestone Cowboy
On The Road Again
Independence Day
Coat of Many Colours
Highway 20 Ride
The Auctioneer
Forever & Ever, Amen
Little Old Wine Drinker Me
How Long
Two Step Too
All My Ex's Live In Texas
Here Comes My Baby
Honey, Open That Door
I Just Wanna Dance With You
If Tomorrow Never Comes
The Cowboy Rides Away
Two Pina Coladas
Wagon Wheel
Cadillac Cowboy
American Saturday Night
Folsom Prison Blues
Lovin' All Night
Ring Of Fire
He'll Have To Go
I'll Leave This World Loving You
Duelling Guitar's
What About Now
The Gambler

The Chris Dunne Band - Country & Western Band - Longford, South East Event Location: Herstmonceux VIllage Hall Event Type: New Years Eve 31st December 2018
I run a club called Golden Spurs CMC based in East Sussex and only book country acts. I met Chris Dunne and the band approx 3 years ago whilst performing at the Lakeside Country Music Club. I have booked them 3 times since and each time is a WOW factor. This band are fabulous, very friendly and I very much recommend this band not just for Country Music. These guys play their instruments and you can see they enjoy performing and entertaining their audience. Our club is in East Sussex and Chris Dunne played for us at our 1st Country Music Festival in a very large barn and for our NYE 2018. I have them booked already for NYE 2019.
Reviewed by: Angela Fox
The Chris Dunne Band - Country & Western Band - Longford, South East Event Location: Harrow CMC, Greenford Royal British Legion Event Type: Country Music Club 29th November 2018
The Chris Dunne Band are clearly one of the best acts on the British Country Music Circuit. Although they are still relatively new to the scene, they have made an amazing impression; wowing many audiences and are a breath of fresh air! The fabulous front man, Chris, is joined by five extremely talented musicians; Roly on lead guitar, Tom on rhythm guitar, Nick on bass, Lee on drums and Gerry on pedal steel. Together they create fantastic harmonies and are an absolute joy to listen to. They play a superb variety of old and new country including songs by Garth Brooks, Zac Brown Band, George Strait and many more; including a variety of different rhythms suitable for all dancers. It is obvious that these guys love playing together and greatly enjoy every gig. This enjoyment is passed on to the audience, creating a party atmosphere. They are extremely reliable and professional - very highly recommended!
Reviewed by: Becky Ibbottson
The Chris Dunne Band - Country & Western Band - Longford, South East Event Location: Woodland Manor Hotel, Bedford Event Type: Wedding 11th August 2018
What can I say without gushing? We booked Chris and the band for our wedding in 11th August 2018 @ Woodland Manor in Clapham. Firstly the communication was first class and nothing was too much trouble which was no small ask as they were dealing with Bridezilla! A full play list was provide for us to choose our favourites. The guys agreed to play an acoustic set, outside in the garden while the champagne reception was held and they had everyone up dancing and singing along setting a great atmosphere for the rest of the day.... the music was first class and catered for all ages... after all the dancing we were all ready for our wedding breakfast! The guys then held centre stage for our evening entertainment and again got everyone dancing and even put up with the Bride making a surprise on stage appearance to serenade her new husband! After a short break the band struck again with more popular great country favourites! They ended the night with a spectacular finale of the auctioneer!
Reviewed by: Tessa Helliwell
The Chris Dunne Band - Country & Western Band - Longford, South East Event Location: Essex Event Type: Barn Dance 19th August 2016
Absolutely fantastic! Would recommend for any barn dance or country event!
Reviewed by: Katie Slater

Between the 6 of us we have over 200 years of musical experience. We are lucky to have a pedal steel player who has played with Johnny Cash, Sheryl Crow, Vince Gill, The Everley Brothers and many more! Chris has performed in many plays and pantomimes and sings in the musical theatre genre as well as Country. Roly has over 20 years experience playing in bands and regularly puts his own spin on the lead breaks and riffs he plays. Tom has been playing guitar since he was 12 and has performed with a few bands over the years. Lee has a wealth of musical experience drumming with artists such as Geor ... ge Hamilton, Dave Pegg, Liza Marshall, Barbary Coast and Crossfire. Nick has been playing bass for many years and has played for Liza Marshall as well as Lee.