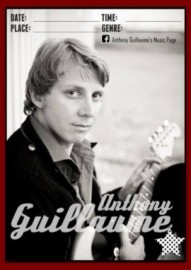 (no reviews)5.0
Country: South Africa
Based In: Vanderbijlpark, Gauteng
Performs: Worldwide
From: Contact

Biography
He has performed all over the Vaal 21 area and in many parts of South Africa at various popular venues such as the
Rus ‘n Bietjie Holiday Resort in Deneysville,
Captains Corner Sasolburg,
Radium Beer Hall in Orange Grove (With fellow Damelin Students),
Geckos Meyerton, Emperors Vaalpark,
Tans Café with Boki (Idols finalist 2010),
Cool Runnings in Melville, Kempton park,
Groot Marico Lodge,
Stonehaven On Vaal,
The Pint Rissiville,
Chasers Three Rivers,
J&B Vanderbijlpark,
German Club Vander ... bijlpark,
Centurions Bike club Vanderbijlpark,
Guns and Roses Sasolburg,
Ingwe Lodge.
The Meadows Restuarant Rissiville
He has performed at events such as:
The Falcons vs. Leopards Vodacom Cup Rugby match in 2009,
Orion Mont Aux Sources Hotel Drakensberg with RFP Music Promotions & Events 2013/2014,
Saloon 2000 With Rudy Fourie Band,
Sasol Vent Stage Production AT Ettiene Rossouw theater, Sasolburg 2012 and
several times at various Biker Rally’s .
Since the beginning of 2014 he is a resident musician for Guns and Roses where he performs once a week.
Anthony has also independently released a CD named For the People in which he performs cover versions of popular and well known songs such as Englishman in New York, Summertime Blues and Hotel California.
An excellent and versatile solo act, Anthony Guillaume is a perfect addition to smaller events such as weddings, birthday parties, small festivals as well as resident entertainer to small pubs and restaurants.

i like to keep an eye on the crowd,it all depends on the people, i usually take it as it comes, i never plan my shows, everyone is something different, that way people don't get tired, i also do some dj work in between when i take my breaks, just to make sure i cover the right genre of music for which ever crowd i'd have on the particullar night.