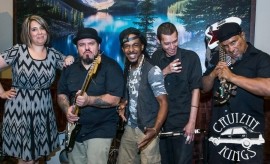 (no reviews)5.0
Country: United States
Based In: Fresno, California
Performs: Within 50 Miles
From: Contact

Cruzin' Kingz is does soul, funk, blues, classic rock, R&B, country and even cumbias. We can do something for almost anyone. Our versatility is our huge advantage.
: 559260XXXX Click here to reveal
full number

When contacting this member, please state that you are viewing their Entertainers Worldwide profile.
Request a Quote
Share this Page:
Profile Views: 443
Report this profile

Cruzin' Kingz spans decades of music. Band leader and lead vocalist, Carlos Montano, keeps the dance floor packed with covers from artists such as Isley Brothers to Bobby Brown to The Weekend. Cruizin' Kings is the band that has the ability to take requests from fans without missing a beat. They can perform multiple genres from County to Classic rock, Cumbias to Pop. Cruzin' Kingz features professional and talented musicians who have worked together for many years and toured throughout California, Oregon and Washington.

This band formed four years ago in 2013 by lead member Carlos Montano (Guitar/Vocals), Tyler Burke (Bass), Javon Davis (Keyboards and vocals) and Matt Alamano (Drums). We each have at least 20 years of gigging in the Valley. This became our main focus with the intent to gig frequently at Casinos, Restaurants, Bars, Hotel Lounges etc. This band has paid or bills and made us a decent wage. Two of us our Family Men.

I started in Church and did concert choir through High School and did a year of concert choir at Fresno State University. My first gigging band was original rap rock and metal music back in 2000. I made by 2003 I formed a Reggae/Rock band called DB and the Struggle and toured. We were together for about 10 years. I formed Cruzin' Kingz with some local veteran musicians in the Fresno scene. The sole purpose of this band was to get good paying local gigs and to play frequently. So far, we've have met some goals but want to continue to get go he next level.