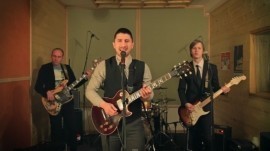 (no reviews)5.0
Country: Serbia
Based In: Serbia/Sombor, Serbia
Performs: Worldwide
From: negotiable

Jam Display is a 4 piece Pop/Rock band, covering high variety of music, hits from the 70's, 80's, 90's 'till the nowadays modern times Disco/Pop/Rock songs with high energy live performances. Definetly one of the best party bands out there for hiring!
Request a Quote
Share this Page:
Profile Views: 199
Report this profile

Jam Display is a 4 piece Pop/Rock band, covering high variety of music, hits from the 70's, 80's, 90's 'till the nowadays modern times Disco/Pop/Rock songs with high energy live performances. Covering songs from over 70 artists such as the Beatles, Rolling Stones, The Clash, Martin Solveig, Billy Idol, U2, Red Hot Chili Peppers, Gorillaz, Bob Marley, Mando Diao all the way to Lady Gaga, Gala, Rudimental and John Newman etc... Definetly one of the best party bands out there for hiring!

Jam Display is a Pop/Rock/Funk band from Sombor, Serbia. The band was formed in 2013 by the founding members Aleksandar Pavic (Guitar/Vocals) and Robert Budai (Electric Guitar) later joined by Marko Jankovic (Drums) and Bojan Milic (Bass Guitar).
They all started jamming and have formed a musical bond on a higher level because of similar music interests. They not only play good music but their live act is spectacular and energetic. Their musical style is influenced by many Pop, Rock, Funk and Jazz bands
so they find themselves inbetween all these genres.

In almost two years since the band exists, the band had over 100 extremely successful gigs in clubs, pubs, discos, festivals all over Serbia, Croatia and Hungary.