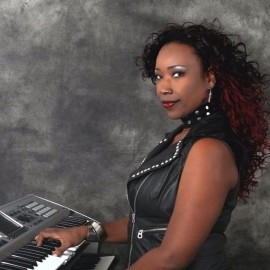 Looking to be added to a band.
I AM ONLY AVAILABLE FOR JUNE AND JULY 2016 AT THIS TIME.

The Janet Montgomery Trio is one of the top bands in the Atlanta, GA USA area. Janet has acquired her style and skill over an extensive period of time. She is one of the sought after Female musicians in the southeastern United States. Not only has she been trained extensively in various forms of music earlier in her career, but Janet has also performed on various stages showcasing her talents on piano and vocals. She has an improvised style that is skillful and soulful. She brings about genres in Pop, Rock, Rhythm and Blues, and Jazz. Her show is one that can soothe an audience into fine dini ... ng, and entertaining a crowd on their feet. She is accompanied by her trio of Bass and Drums, and her humor and eccentricity is one that the listener will never forget. Her piano sounds and electric keyboard pizzazz holds a variety of entertainment choices for the performing market.
Ms. Montgomery has also been the theatre musician and vocal coach for musical productions such as Heart of Dixie, Jesus Christ Superstar, Have you heard about the Revival, Lion King, The Dracula Spectacula Show, and The Wiz. Janet is considered to be part of Atlanta’s mainstream local talent, accompanied by her band the “Montgomery Music Project” She has performed at many venues such as, “Chicago’s very own” restaurant, “Seasons Bistro” “Black Expo” Café 290, Lakewood Amphitheatre just to name a few.
Janet, is known as one of the demanding female musicians in the city of Atlanta, and the southeastern part of the United States. She has been the musician for the last year of Kenne Wayne, Southern Soul Blues Artist, with a #2 song on the Zydeco charts.
She has also performed in Russia, Sweden, Copenhagen, Finland, Italy, Spain and many other international and domestic cities around the world.
She has completed her sophomoric project “A New Beginning” which is entirely composed of Instrumental Piano Jazz music, with undertones of inspiration. Her style as described by other musicians has an R & B feel with funky riffs and motifs. Her music is a fusion of neo-soul, funk, and nu-jazz. She best describes her music as “familiar funk without lyric.”