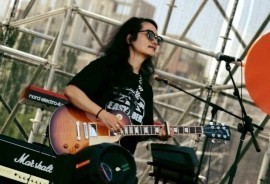 I am basically a Keyboardist. I have played with various bands in Nepal and China. I play different styles of music.
: +977981836XXXX Click here to reveal
full number

Cornerstone is a Nepali cover band based in Thamel, Kathmandu, formed in 2007. Cornerstone believes in creating music which resonates in the hearts of the people. The band's uniqueness come from its members as their diverse music taste results in creating music which is more than a fusion of music genres. In essence this band aspires to create its own music genre which is hard to define in words, which can only be felt when you listen to their beats.
Waves of success achieved in last few years are clear manifestation of their hard work, dedication and taste of music which has been appreciate ... d by the masses. The band has already played in almost all of the bars in Thamel, Kathmandu which is considered as the hub of the successful bars of Nepal where most of the audience are foreigners from all over the world. Cornerstone is here in China since 2013 and currently the band is playing in one of the best bars of Ningxia named Liang Yuan Live Music bar. Also, the band plays in various events here.

We started working in China as a musician since 2013. We worked in different live music bars here including Kempinski Hotel, Liang Yuan Music Bar, Pake Music bar, Hutaoli. Before Chiba, we used to work in live music bars at Thamel, Nepal where most of the successful bars of Kathmandu is located. We played in bars named Purple Haze Music Bar, Shisha live music bar, Reggae Music Bar, Lasha Music Bar, Factory, Faces and so on in Nepal for six years since 2007 to 2013 before we came to China.