I'm looking for:
near:
No valid location selected.
You Are Here: Live Bands / Cover Bands / Barbados / The Real Deal 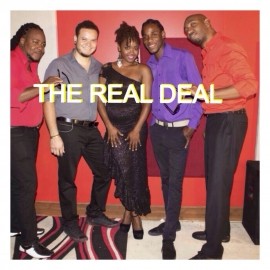 (no reviews)5.0
Country: Barbados
Based In: Bridgetown/ Barbados, Barbados
Performs: Worldwide
From: Contact

If it feels good dance. The Real Deal is well equipt to handle any gig. We have been together for two years, the band has performed on ships, hotels, weddings, parties.
Request a Quote
Share this Page:
Profile Views: 304
Report this profile

The germination of the band was in 2013 and in 2014 we started playing on
board cruise ships. The sound of the band blew the minds of many on board the ships
thus fulfilling a remarkable contract. As a band we aim to cater for entertainment on
cruise ships and as such during the ensuing months, some members were transitioned
and the band is currently made up of the following:
Vocalists:
Tennicia "Tenn" De Freitas: Lead Vocalist
Jonathan Banfield
Instrumentalists:
Earl "IBassie" Timothy: Bass Guitar
Jonathan Banfield: Lead Guitar
Khaydon "Chappy" Chapman: Keyboard/Piano
Jamar " ... BamBam" Small: Drums
Each member has a remarkable musical background and they combine to create a
special UNIQUENESS that is the sound of THE REAL DEAL ( TRD).
The music that is "TRD" has been influenced by various genres of music, from Jazz, to
Calypso, Reggae, Pop and everything in between plus our diverse nationalities, as
members of TRD reign from different countries in the Caribbean.
The name "THE REAL DEAL" wasn’t chosen by accident. The band performed its first
show in Barbados where folks enjoyed the great performance of the band,
complimenting us with comments such as, “You guys are the real deal.” Being told this
by numerous guests, we chose this as our name and aimed to bring life to many souls.
The music played by TRD is intended for the young, not so young and the old. We
make sure that every listening ear is well entertained by our diverse repertoire
combined with nurtured skill.
For bookings, the band can be contacted via:
Email: therealdeal32015@gmail.com
Tel: 1(246)269-9470, 1(868)488-0061