You are contacting Dame Fawn Denier 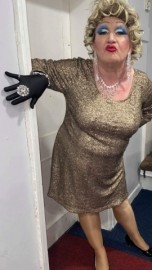 Hilarious stand up comedy with lots of audience participation and banter combined with live vocals performing songs from the stage and screen, parodies and camp classics I also perform "It Should Have Been Me" at weddings
Request a Quote
Share this Page:
Profile Views: 1156
Need Help?
✖