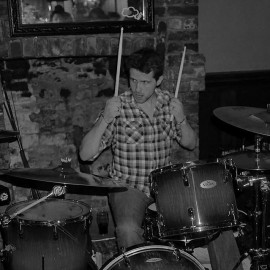 Dave picked up his first pair of sticks aged 11 when he started at secondary school. He was taught by James Allard from the Northamptonshire Music & Performing Arts Service (where Dave would later teach for), who encouraged him to play as much as possible, and with other musicians.
​
At the age of 13 Dave sought tuition from Tim Earl. It was Tim who helped Dave develop skills up until the age of 16. While studying with Tim, he was pushed in the direction of fusion and progressive rock music. This was a big turning point for Dave as he realised there was more to playing in four four time!
...
​
During Dave's latter years at secondary school, he was taught by a jazz drummer named Charles Sheinman. Charles opened many doors introducing Dave to artists such as Miles Davis, Dave Brubeck, Count Basie, and Charlie Parker, to name a few. This is where Dave began to listen closely to instrumental phrasing of lead instruments. Dave began to develop a system of listening to the rhythmic phrasing of the lead instrument, and play back the rhythmic phrasing on the drums. This was where Dave began to listen to lots of improvisational music including different jazz genres, and Indian song form.
At the age of 18 Dave enrolled at the Drum Tech, London on the BMus Popular Music Performance degree course. While studying at Drum Tech, Dave was taught by many industry professionals including Paul Elliott, Pete Cater, Mick Morena, Shaun Baxter, Misha Nickolic, Phelan Kane, Justin Scott, and Francis Seriau.
It was here that Dave developed his technique, sight reading, and performance skills, as well as taking an interest in recording techniques, and studio skills.
In July 2006, Dave graduated from the Drum Tech with a BMus(hons) degree in Popular Music Performance.
Dave had performed with local bands and artists leading up to the point of enrolling at Drum Tech. After graduating, this was the point where Dave would put everything he had learned into practice to make a living from music.
​
After graduating, Dave's first job came as a peripatetic drum tutor for the Northamptonshire Music & Performing Arts Service, teaching in schools in Northamptonshire and Buckinghamshire.
​
Dave spent two years in the house band at Butlins, Skegness, as a reading musician, as well as teaching for the Lincoln Music Service, and working as a live performance tutor at the Boston College of Music.
​
Dave moved on to the Fenland Music Academy as head of drums for a year. This was where he met vocal tutor Matt Strafford, who asked Dave to join an originals band, the Brink.
​
In 2010 The Brink travelled to Los Angeles to record their album Broken Romance. The session took place in Studio Sphere, and Dave had the pleasure of recording on a kit used by Phil Rudd, which was hired in.
The band was later signed to EC3 Records. In 2014 Dave decided to leave the band and concentrate on his session career and finshing setting up The Rockin' Horse Recording Studio.
​
Dave has toured Europe and America, with The Brink, the Aiden Pryor Band, Stefan Kugler, Sophie Garner, and other artists.