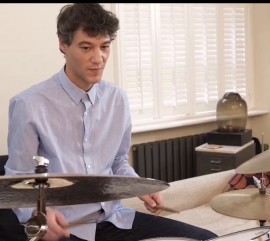 I’m a professional drummer with more than 15 years of experience playing different styles, who loves music, especially jazz, and traveling the world. I really would like to combine both. I can read music at first sight and i have finished a degree as a jazz musician.
: 0770794XXXX Click here to reveal
full number

When contacting this member, please state that you are viewing their Entertainers Worldwide profile.
Request a Quote
Share this Page:
Profile Views: 355
Report this profile

I am a profesional musician, specialized in drums and percussion, based in London, with more than 15 years of experience as a musician. I have traveled to learn, teach and perform in different countries, always trying to expand my knowledge of music and cultures to share it.

Jose Rico
Biography
Spanish musician born in Toledo (09/12/1981). He began as a drummer in the psychedelic rock band “Cicely” (1994-2002), formed in his hometown Torrijos (Toledo), recording three demos albums, playing in the province of Toledo at the beginning and later in numerous theaters from Madrid.
In 2003 he moved to Barcelona where he began his musical studies in the “Tallers de Musics” for two years (drums with Alberto Cabello) and began to others styles (Latin, Soul, Funk, Flamenco), playing in short-term formations in several clubs in the city.
In 2006 he ret ... urned to Madrid and continued studying drums with the maestro “Carlos Carli” for two years more at the “Escuela de Musica Creativa”.
In 2008 he began to study classical guitar, playing in cultural centers and small theaters. It also begins teaching drums and musical language privately.
In 2009 he traveled to Brazil, settling temporarily in Salvador de Bahia, where he studied percussion with musicians from “Olodum”.
In 2010 he returned to Spain where he recorded as a percussionist for the English label “Fire Records”, an album called “Anda Jaleo”, with the band “Josephine Foster and the Victor Herrero Band”. They are a set of traditional Spanish songs compiled and harmonized by the poet “Federico Garcia Lorca” in 1930. The arragements of the poet and his recordings with “La Argentinita” serve as inspiration for the proyect.
With this same line-up, in 2012 he recorded “Perlas”, for “Fire Records” again. A new collection of Spanish popular songs. With this band several tours are carried out in European countries (France, England, Germany, Poland, Italy, Portugal, Spain) and in Morocco.
In the summer of that same year he recorded as a drummer-percussionist for the Barcelona label “Fohen Records” an album called “Tiempo para la Cosecha”, with the formation “Viva”, where African polyrhythms are mixed with electric guitars, bass and keyboards, bass the leadership of el maestro Togoles “Gamal Seya”, with whom he studies percussion for two years. Tours are held in Spain and Portugal, playing at international festivals such as “Primavera Sound”.
In 2013 he moved to Buenos Aires (Argentina), where he studied with Marcelo Blanco, Daniel “Pipi” Piazzolla, Carlos Lastra, Santiago Hernandez, Jorge Puig, Osvaldo Burucua, Josengo Frojan, etc… and studied a career as a Jazz and Argentine Folklore interpreter at the “ Instituto Superior de Musica del Sindicato Argentino de Musica”(Higher Institute of music of the Argentine Musicians Union) SADEM. During these years he plays in many formations, especially Jazz, with musicians such as Carlos Lastra, Jorge Puig, Josengo Frojan, El “Mono” Horacio, Gabriel Barbato, Javier Hitt, Marcelo Ezquiaga, Beto Foronda, Lucas Lorenzo, David Morales, Luz Kaplan, Macarena Zalaza, Gonzalo Mazzuti, etc…
In 2018 he moved to London, where is playing especially Jazz (Latin, Bossa, Samba, Funk, Afro, Swing, etc…)

Education:
• 2013-2017: “Superior Technique degree as a Jazz and Argentine Folklore interpreter”. Taken in SADEM (Escuela Superior del Sindicato Argentino de Músicos, Higher Institute of Music of the Argentine Musicians Union).
• 1998-2002: “Superior technical degree in business administration and finance”, at “Ies. Beatriz Galindo”, Madrid, Spain.
• 2005-2008: “Escuela de Música Creativa”. Madrid, Spain. Drums, ensemble, styles and musical languaje. Drums with the master “Carlos Carli”.
• 2003-2004: “Taller de Musics”. Barcelona, Spain. Drums a ... s the main instrument, musical language, harmony, ensemble… Drums with “Alberto Cabello”, a great musician-drummer.
Profesional experience:
• 2010: “Anda jaleo”. Josephine Foster & the Victor Herrero Band. “Fire records”. As drummer-pecussionist . A collection of tradicional Spanish songs compiled and harmonized by the spanish poet “Federico García Lorca”. A tour around Europe and Morocco was made.
• 2011: “Tiempo para la cosecha”. Viva. “Fohen records”. As a drummer-percussonist (world music). International shows and music festivals were made .
• 2012: “Perlas”. Josephine Foster & the Victor Herrero Band. “Fire records”. As a drummer-percusionist. A collection of Spanish tradicional songs rearmonized and rearranged. A tour around europe and morocco was made.
• 2008: I began to teach drums, percussion, musical language and harmony privately, something that i have always kept doing.
• 2013-2017: Jazz musician in the city of buenos aires, playing with musicians such as Carlos Lastra, Osvaldo Burucúa, Jorge Puig, Josengo Froján, Gabriel Barbato, etc ... in different formations and clubs in the city (Virasoro Jazz Club, the Usina del arte , Ladran Sancho, la Librería Jazz Club, etc ...) and with self-created bands (Jose Rico Quartet, Sci-Fi Quartet).
• 2014-2017: Working with the pop acoustic trio “Caballo Loco”, with Marcelo Ezquiaga and Francisco Funnes, their own music, in Buenos Aires and surroundings.
• 1994-2002: Working with the rock band “Cicely”, with three demo albums recorded, in Spain.
Others:
• 2016: Drums with the master “Daniel ‘Pipi’ Piazzolla”, grandson of the legendary Tango composer “Astor Piazzolla” and one of the most valued musicians-drummers of Argentina.
• 2015: Be-Bop ensemble, harmony and repertoire with the master “Carlos Lastra”, head of the jazz chair of the Superior Music Conservatory “Manuel de Falla” in Buenos Aires, Argentina.
• 2009: Percussions and drums with musicians from “Olodum”, one of the most important percussion groups in Brazil, during six months in Salvador de Bahía, Brazil.
• 2008: Classical guitar, until the fourth year of conservatory, with private lessons and self-taught. I played professionally as an entertainer in hotels and private events.
• 2013: I worked in a summer orchestra of covers through Spain, called “Bahía Blanca Orchestra”.

I have my “NIN”, national insurance number.
I have my DBS check.