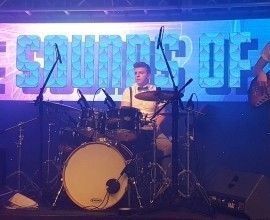 (no reviews)5.0
Country: United Kingdom
Based In: Middlesbrough, Yorkshire and the Humber
Performs: Worldwide
From: Contact

Strong sight reading drummer looking for work at sea to peruse the desire to travel the world whilst doing what I love the most, playing the drums.
Request a Quote
Share this Page:
Profile Views: 225
Report this profile

Kieran started playing drums at the age of 6 and quickly became heavily involved in the brass band scene! At the tender age of 14, Kieran joined the world renowned Black Dyke Band as the youngest ever member. He enjoyed a successful 3 year period there performing in many of Europe’s greatest concert halls including the royal Albert hall, Birmingham symphony hall, Manchester’s Bridgewater hall, the Sage Gateshead, Oslo Konsertus, and the KKL Lucerne. In 2016, Kieran decided to take to the seas, turning his passion for drumming into a professional income, playing all kinds of genres, backing ... cabaret artists and production shows. He quickly realised that this was something he wanted to peruse for the foreseeable future, playing the drums, traveling the world and facing new challenges day in day out. He has been working with Explosive Productions and Saga Cruises as a result of this where he has enjoyed many fantastic opportunities.