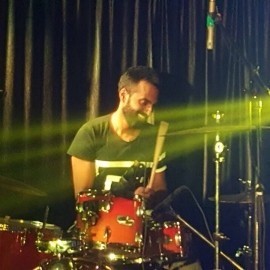 (no reviews)5.0
Country: India
Based In: India, India
Performs: Worldwide
From: Contact

I'm a drummer/musician based out of India. I have been playing actively for the 15+ years. I've a vast experience in playing pop/rock/funk/jazz/afro Cuban/funk fusion. I'm a graduate from The Drummers Collective, New York City.
: 987334XXXX Click here to reveal
full number

Profile
Kunal ​- Percussionist | Performer | Instructor
Kunal has been playing drums as his principal instrument for the last 17 years. The journey truly
began when Kunal attended his first ever professional workshop at Swarnabhoomi Academy of
Music, where he studied with 9 times Grammy Award Winner, Rodney Holmes and the renowned
teacher, Benny Greb. He also spent a significant time under the rigorous mentorship of Manoj Mavely
in Delhi, after which he was accepted at the prestigious 'The Collective School Of Music' in New York.
Drummers Collective, reputed for being the world's best ... school for drums gave Kunal the opportunity
to shape himself by being at the heart of artistic and commercial music scene in New York. While
studying there, Kunal was fortunate to study under some of the best teachers in the percussion
segment namely; Ustad Zakir Hussain, Peter Retzlaff, Pat Petrillo, Vince Cherico, Marco Djordjevic,
Jason Gianni, Ian Froman, Chris Coleman, Steve Smith.
Kunal graduated from Drummers Collective in 2015 with a record score of 100 in Rudimental Skills
which led him to realizing his versatility in different genres of music. Strong foundation and tenacity in
rudiments allows Kunal to effortlessly perform and teach styles like Reggae, Pop, Funk, African, Drum
n Bass, Brazilian, Afro-Cuban, Funk-Fusion and especially Jazz. Taking his commitment a bit further in
New York Kunal also performed at various artist locations in the city; with ‘'The Latin Jazz Ensemble'
at Cafe Wha, Club Groove, and Carroll's Place. Independently with Kristen Abraham fellow Vocalist
from Brooklyn and at several open jam sessions.
In 2016, the upcoming jazz scene in India piqued Kunal to return to the homeland. In his own artistic
pursuit and thrill he has been playing with a variety of projects in different cities in the country and
internationally. Some of the prominent ones are;
- 500+ shows with EKA | Award winning pop / rock / indie band
- Borders | Original music project | Featuring Anton Serrats on Bass (Spain), Luic (French Guitarist),
Pranai Gurung on Guitar (Delhi)
- Jazz Espertano | Jazz / Afro-Cuban/ Funk Fusion | Featuring Praduymna Singh Manot on Keys,
Anton on Bass & Aayushi on Guitar
- BollyJazz | Jazz/Bollywood | Featuring Nikhil on Vocals and Guitar, Nathalie Ramirez on Flute, Pranai
Gurung on Guitar, Harshit Mishra on bass
- Paddy and Friends | Featuring Praduymna Singh Manot on Piano, Sanjeeta Bhattacharya on Vocals,
Sergio Dinarte on Bass
- Big Bang Blues | Blues / Country | Featuring Ipshita on Vocals, Rahul Rai on Bass, Sushant on Guitar,
Shivam on Keys
- Mausiqaar | Sufi / gospel / rock | Featuring Amjad Khan on Tabla, Rizvan Khan on Vocals, Sonic on
Bass, Subhanshu on Guitar
- River People | Featuring Sonu Sangameswaram on Keys, Utsav Lal on Keys, Pranai Gurung on Guitar
- Spaces | Fusion / Pop / Trip Hop | Featuring Tritha on vocals and Guitar, Ritika on Vocals, Sergio Dinarte on Bass
Stitch in Time | Electronic Drum 'N Bass project | Featuring Neil Gomez on Guitar, Harshit Mishra on
Bass
- DMT | Electronic / Neo/ Hip Hop | Featuring Ranjit Arapurukal on Keys & Anton Serrats on Bass
- Sounds Of The Ghetto | Featuring Nipun Cheema on Piano/Accordion & Sonic Shori on Bass
Kunal's permanent home is now Gurgaon where he practices, teaches and innovates out of his own
studio. He can be witnessed performing extensively while exploring various styles with multiple
projects at Public & Private Events. Some of his past engagements are; Panama Jazz Festival 2018, Magnetic Fields Festival,
Kingfisher OctoberFest, Giants Of Jazz Festival at The Piano Man Jazz Club, The Earth Care Awards,
EEMA Awards, Jazz India Circuit, Chivas Regal / Blender’s Pride Fashion Tour, Dehradun Literature
Festival, Bhutan Literature Festival, Kasauli Rhythm & Blues Festival and many more.
Soundcloud: https://soundcloud.com/kunal-netrapal
Get in touch: nkunal7@gmail.com | +91 9873348034
YouTube: https://www.youtube.com/user/nkunal11

Share this Page:
Click here to view all of our Drummers on Entertainers Worldwide
Browse all Entertainment Hire options!