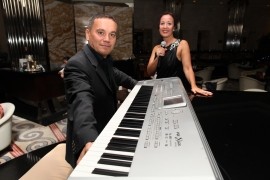 We are Italian duo with a long professional experience in five stars International hotels around the world.
: +97150562XXXX Click here to reveal
full number

When contacting this member, please state that you are viewing their Entertainers Worldwide profile.
Request a Quote
Share this Page:
Profile Views: 248
Report this profile

We are available for any contract or event....
Instruments: Piano, keyboard, electric violin and voice....
We have International repertoire and can sing in more languages.....

EDUARDO VETERE
He has received the Master Degree in violin from the Art and Music College (Conservatorio) "Benevento” (Italy).
He has performed as solo violin in shows organized by the Music College of Salerno and Naples. The latest performance took place in the Palace of the King in Naples.Since the 1986, he has performed as soloist as well as orchestral in several shows in many cities of South Italy, gathering many prizes. All of those are documented. He is the leader of the "Solisti Napoletani" trio as well as of the "Partenopenote" duo, gathering big success around the word. He h ... as played also many times in several performances organized by both cultural and show people. On the 8th of March 1990, he has performed in the TV show "Piacere Rai Uno". He has recorded with the "Solisti Napoletani" trio several songs with the recording label "Fonit Cetra" in Rome. Those songs have been broadcast by the "Stereo Uno" Radio station. He has played at the "San Carlo Opera" theater as member of the Art and Music College "S. Pietro a Majella" orchestra. He has performed at the 1 edition of the show "Nuova Piedigrotta Napoletana", which took place at the "Cilea" theater in Naples on 1990. As soloist player of the music group supporting the performances of the Maestro Roberto Murolo, who recognized him as excellent executor of the Neapolitan song and culture. He has performed at the TV show "Mezzo Secolo di Canzoni" on the air on the "Canale 21" channel. He has been a member of the "Orchestra Mediterranea" in the TV show "Fatti Vostri" brodecast by "Rai Uno" on 1995. He has performed as soloist in shows of many recognized artists, such as Fred Buongusto, Antonio e Marcello, Milva, Loredana Bertè, Massimo Ranieri, Riccardo Cocciante. With Fred Bongusto he has played at the "Necombo" in Ischia. He has been 1st violin of the orchestra " Libentia Cantus".
Since the 1996 as leader of the "Partenopenote" trio and “Dolce Vita” duo and he has been engaged abroad as strolling and piano bar by the biggest hotels in the Middle East as well as in the Far East, such as the Sheraton hotel Cairo Egypt, Renaissance hotel Kuala Lumpur Malaysia, Sheraton hotel Deira Dubai (u.a.e) Hilton Beach Club hotel Dubai (u.a.e) Hyatt Regency hotel Dubai (u.a.e) Al Bustan Palace hotel (Inter-continental) Oman Muscat, Sheraton hotel Manama Bahrain, Hyatt Regency hotel Dubai (u.a.e) Carenage Bay Rosewood hotel e resort Canouan Grenadines west indies Caribbean, Rotana hotel Al-Ain & Trader Vic’s (u.a.e) Rosewood hotel Canouan Granadines Caribbean, Kempinski hotel e resort Ajman (u.a.e) Capri Palace hotel Capri Island Italy, Elounda beach Club hotel (Creta) Greece, Kempinski hotel Ajman (u.a.e) Capri Palace hotel Capri Island Italy, Movenpick hotel Morocco Tanger, Capri Palace hotel Capri Island Italy, Crowne Plaza hotel Abu Dhabi (u.a.e) Capri Palace hotel Capri Island Italy, Millennium hotel Abu Dhabi (u.a.e) Capri Palace hotel Capri Island Italy, Kempinski hotel Giardino di Costanza Mazara del Vallo Sicily Italy, Martinez hotel Cannes France, Inter-Continental hotel Abu Dhabi (u.a.e) Grand Millennium hotel Abu Dhabi (u.a.e)Mercure Hotel Abu Dhabi (u.a.e) Novotel Abu Dhabi (u.a.e)….Before performing abroad, he has played as solo violin and piano keyboard in the best hotels in Naples: Excelsior, Santa Lucia, Vesuvio and Quisisana in Capri.
About his music, several national and international news papers have written up.
He is member of the E.N.P.A.L.S. as orchestral. He is also member of the musician
trade union.
During his studies at the Art and Music College, he also obtained a qualified teacher, matter included to the program of study.
Four years experience in teacher music school.
Whenever required a full documentation of the above activities is available upon request. 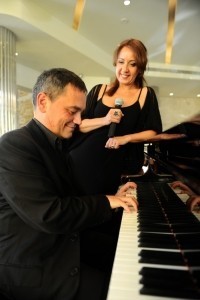 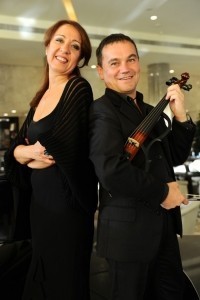 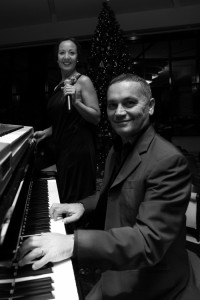 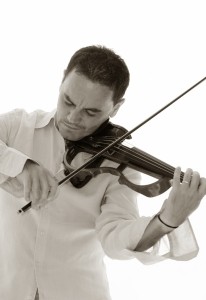 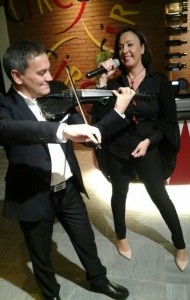 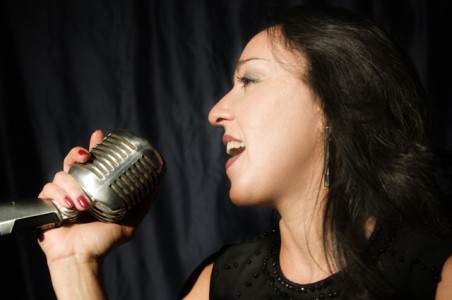