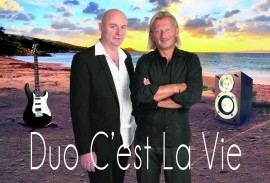 (no reviews)5.0
Country: Slovenia
Based In: Slovenia/Koper, Slovenia
Performs: Worldwide
From: Variable

When contacting this member, please state that you are viewing their Entertainers Worldwide profile.
Request a Quote
Share this Page:
Profile Views: 840
Report this profile

Duo C’est La Vie
Duo C’est La vie is working now for 8 years, after we have stopped playing with a C’est La Vie Band after 23 years. In the last 8 years we've been playing private parties,weddings, few clubs in Germany and summers in Austria at Parkhotel Poertschach and on DFDS Seaways in Scandinavia.
Equipped with a good PA system, travelling with our own Van,both singing…..
We speak English,German and Italian as well.
We are looking for a longer period residential jobs.

Members:
JADRAN - Keyboard player:
Slovenian nationality
Started learning and playing accordion 7 years old, later studied music at Music Academy in Ljubljana-Slovenia.
In time of study has played in several cover and rock bands.
For 23 years, was a leader of band C’est La Vie, which had played and worked in almost whole Europe, in hotels, dancing bars, discotheques, ferry and cruise lines….
Also worked with several Slovenian musicians and singers, in studios and on tours.
EMERIK – Guitar player:
Croatian nationality
Like a kid started playing mandolin with local orchestr ... a.He started learning playing guitar after that and he was working for many Croatian musicians on tour and recording studios and in several Croatian cover and rock bands.
He was playing few years in C’est La Vie Band.