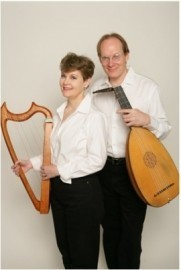 Duo Marchand takes its name from a family of court musicians that flourished in 17th-century France. In recent seasons the Duo has performed at The Metropolitan Museum of Art; The Cloisters; Connecticut Early Music Festival; CityMusic in Columbus (OH); the Great Falls (VA) Chamber Music Series; The Hudson (NY) Opera House; The Chapel of Our Lady Restoration in Cold Spring (NY); the Yale University Collection of Musical Instruments; The French Church on Historic Huguenot Street, New Paltz (NY); Baroque Sundays at Stony Brook; Moravian College in Bethlehem (PA); the Lute Society of America Confe ... rence and Seminar in Cleveland; Washington D.C.'s historic downtown Church of the Epiphany; and the Yale Center for British Art.
Soprano and historical harper MARCIA YOUNG is a regular member of the renaissance group My Lord Chamberlain's Consort and the medieval trio Trefoil, which has toured widely since its founding in 2000. In recent years she has performed with the Folger Consort, the Newberry Consort, Parthenia, and the renaissance band Piffaro, and has been heard in recital on the Ars Antiqua series in Chappaqua (NY); The Distinguished Artists Series in Syosset; the HotShops gallery space in Omaha; and at the Metropolitan Museum of Art. Young has taught vocal and instrumental classes at the San Francisco Early Music Society's Medieval and Renaissance Workshop. During the academic year she serves as Director of Performance Studies for the Department of Music, Stern College, Yeshiva University. She has been a classical radio host for WQXR, Sirius/XM, and WNYC-New York.
ANDY RUTHERFORD began studying the lute in connection with his interest in 17th-century art, especially the paintings of Caravaggio and Vermeer, which often feature the instrument. A regular member of My Lord Chamberlain's Consort, Rutherford has also appeared at Tanglewood and Lincoln Center with the Mark Morris Dance Group, and on the Temple of Dendur series at the Metropolitan Museum of Art. He performs regularly with such ensembles as Empire Baroque, Parthenia, the New York Consort of Viols, Musica Antiqua New York, Chacona, New York's Ensemble for Early Music, and the Big Apple Baroque Band. Internationally recognized as a builder of lute-family instruments, Mr. Rutherford has taught and lectured on the history of lute design at the Lute Society of America Conference and Seminar. 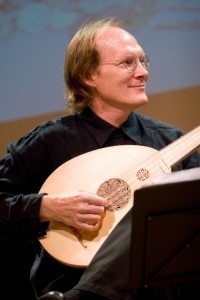 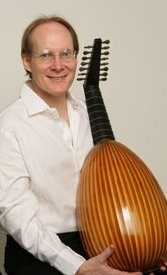 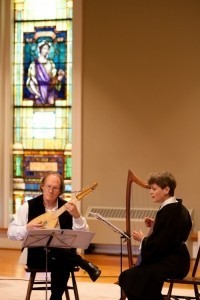 In recent seasons Duo Marchand performed a series of concerts under the auspices of the New York Public Library's exhibition of illuminated manuscripts, "The Splendor of the Word." The Duo was also presented by the New York Botanical Garden in a series of performances ancillary to its special exhibition, "The New Renaissance Garden." The Duo's program of songs from the Shakespeare plays has twice been broadcast nationwide over Sirius XM Radio.