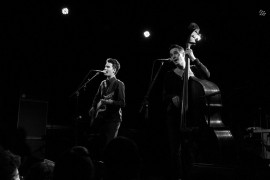 (no reviews)5.0
Country: United States
Based In: Boston, Massachusetts
Performs: Worldwide
From: Contact

By way of Boston, Fontaine now resides in Chapel Hill. A brother duo blending harmonies and rhythmic progressions to make their indie folk sound. Over a decade of live performing has brought them across the country on national tours, college circuits with NACA, writing and recording with Grammy nominated artists and producers. With aspirations to have their sounds heard, they're recording an EP called Acoustic Box.