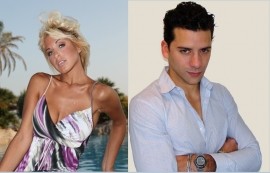 (no reviews)5.0
Country: Brazil
Based In: UK / Brazil, Brazil
Performs: Worldwide
From: Contact

Mardi Gras Duo
The duo is formed by Gilberto Bueno (guitar /voice) and Renata Bacal (voice/ percussion/ guitar) and has first performed together in 2010, when they have worked for 6 months on holiday resorts around the island of Ibiza, Spain.
Since then, the duo have performed in Greece and several locations around Spain including Ibiza once more.
They have also worked onboard a few cruise ships for P&O, Thomson and Norwegian cruise lines. It was a very familiar environment as Gilberto used to work as a stage manager/audio engineer and Renata as a musical theatre singer/dancer, performing o ... n Broadway and West End shows at sea.
The duo is very versatile; with a repertoire ranging from the 50’s to date with over 300 songs, including all kinds of styles. They perform with quality backing tracks produced by themselves, and acoustic, always adapting to the kind of venue and atmosphere.
Booth members speak fluent Portuguese, as native language, English, Spanish, and basic Italian, a key tool on interacting/engaging with the audience, which they consider to be of great importance during a performance.
Very energetic and enthusiastic duo which will certainly get everyone spirits high.
Other interesting facts from the duo:
Renata is graduated in musical theatre and was finalist on the Brazilian Idol.
She has also starred in many drama plays and television.
Gilberto is also a music producer and apart from guitar, he plays bass, drums and writes music for performers.
They have both lived in London, England for two years where they mastered English and studied/practiced customer services skills.