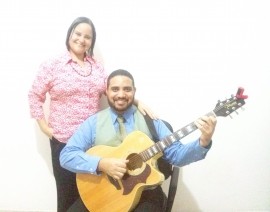 (no reviews)5.0
Country: Brazil
Based In: Brazil
Performs: Worldwide
From: Contact

We're a brazilian acoustic duo with an international setlist that includes: Pop, country,oldies, brazilian music.Our repertoire is sung in English,Portuguese,Spanish and Italian,we make it simple and with quality.We are ready to start a contract from November 30th on.
: +55 13 98125XXXX Click here to reveal
full number

We have both a duo and a trio which can also be seen on the link.We interact with the audience in the languages mentioned below.We believe we show respect to the different nations gathered in the audience interacting with them in their languages,that creates a conection that makes the performance flow better and creates a good memory to the guests.

We play an international upbeat setlist but we can also play a brazilian-music-only repertoire in case the employer requires it!

The acoustic duo Sea Sound is formed by the brazilian siblings: Jemima (singer) and Jason (guitarist and vocal). Their repertoire is based mostly on American pop music and it includes some Motown,oldies,country and brazilian music. They sing in the following languages: English, Portuguese,Spanish and Italian.Both are free lancer musicians and have experience playing on: weddings, anniversaries, birthday parties and night clubs.Performed in the summer festival of the cities of Santos and Praia Grande in the state of São Paulo- Brazil.The duo recorded their gospel album called Look at God in 20 ... 12 with songs written by Jason in Portuguese and English language.They performed and sold their album around the state of Sao Paulo in many different Christian events since then.

The guitarrist has worked for an Italian cruise ship company called Costa Croicere around Europe.