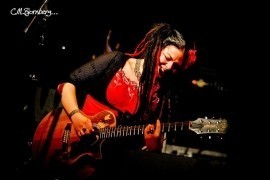 Sista Otis is a Singer/Emcee/Songwriter/Performer Extraordinaire whose sound was born in Detroit and raised in New Orleans. As she tells the story, "In a lil' Jazz club in the French Quarter, lady Blues was feeling the Soul from Motown. So she Hip-Hopped up on Motown's lap to Rock 'N Roll and got the Funk on. Meanwhile, Folk wondered in off the streets with crazy hair and dark shades an wrote the story down." On that night, Sista Otis was conceived but she just calls it, "Rock 'N Roll"
Sista Otis on Powerful vocalist and guitar w/ Skye Robert Berns on Harmonicas

Sista Otis is a good god all mighty force of nature! A Songwriting/Soul Singing Prophetess of Rock N' Roll, highly acclaimed by the critics, with a wall full of awards. Armed to the teeth with an All Star cast of internationally renowned monster musicians backing our songstress, whose voice is pumping out 100% proof soul-shine so warm and good, it'll make you throw your hands up and shout! Her headline achievements and record sales got their attention but her talent, stage charisma and socially conscious songs captured their hearts. Sista Otis cut her teeth as a traveling street kid musician, ... writing and performing her own songs for pocket change, to become a national touring artist. Now having sold over 100,000 songs and downloads, she is an international recording artist. Opening for such acts as Zac Brown Band, Blues Traveler, Fishbone, Bitch and Animal and festival headliners, Wilco, R.E.M, Kings Of Leon and many more. With air play in 12 different countries, songs featured in Indie Films and international animation, you'll keep hearing about Sista Otis because she is what music legend is made of. Now that's a mighty big claim but I swear, go out an catch her show, it'll change your life. You will find our hometown sweetheart is the real deal, touring year round and out there somewhere criss-crossing the American black top right now, living the song writers life with nothing but the fans that love her to call home.
"She has enough power to fuel a fire and enough soul to make James Brown proud."
- Rachel May, Detroit News 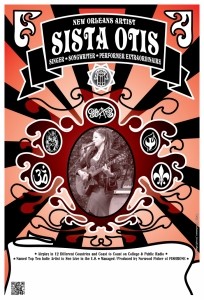