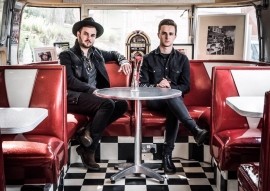 Foreign Affairs are a Country-Rock duo from Bristol, comprising of brothers Adam and Lawrence Purnell. The powerful, passionate vocal of younger brother Lawrence turns heads instantly but it is the carefully crafted songs and energetic performance that keeps them facing
: 0784670XXXX Click here to reveal
full number

When contacting this member, please state that you are viewing their Entertainers Worldwide profile.
Request a Quote
Share this Page:
Profile Views: 375
Report this profile

Foreign Affairs are a country/rock duo formed by brothers Adam and Lawrence Purnell.
Formed in 2013, Foreign Affairs have played sell out venues throughout the UK & Europe, including appearances at Glastonbury Festival, Cambridge Folk Festival, Country to Country Festival at the O2 Arena (London). Their debut record received airplay from BBC Radio 1 & 2 as well as performances on national television.
The duo play a mixture of instruments including (electric guitar, acoustic guitar, bass drum, tom drum, piano & vocals) and the result is a foot stomping catchy sound consisting of originals and ... covers.

Foreign Affairs are a Country-Rock duo from Bristol, comprising of brothers Adam and Lawrence Purnell. The powerful, passionate vocal of younger brother Lawrence turns heads instantly but it is the carefully crafted songs and energetic performance that keeps them facing that way.
Between catchy choruses and close harmonies, you will ultimately hear an honest and raw country/rock sound, one that has inspired them over the years to create their own unique take on the genres. 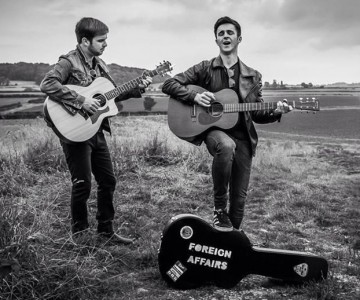