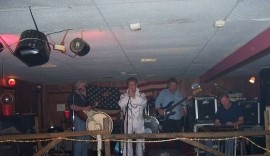 I have been singing Elvis since I was 10 years old.You close your eyes when I am on stage, you will hear ELVIS. ( No joke ) #
Request a Quote
Share this Page:
Profile Views: 907
Report this profile

I have been singing Elvis and other artists for over 30 years. I am a professional, it has to be perfect so, I am a perfectionist. I have all the state of the art equipment enough power to perform very large venues.I have a great set of lights, "Professional stage " fog machines to illuminate the light show and that everyone has a great time "Dancing to the music & lights". I have over 600 different digital recorded backing tracks ( including full Elvis concerts ) ie Aloha From Hawai full concert and the Elvis 68 comeback special concert all digitally remastered for optimal sound performance t ... o accompany this voice. I have never had a complaint and often in my shows, people are actually crying because they fell the emotion.That is what I am all about. I put the love, feeling, my heart and emotions into my work and that communicates with my audience. I have never been "big headed" about my Elvis tribute show, I don't boast all over the internet and spend thousands of pounds on creating a "sparkly dazzling website" to try and get work, I see this all the time. I live a quiet life, but I have this gift, I need to give to people and that is "The Voice Of ELVIS PRESLEY".So if you are looking for (and now I do have to say this) "the best Elvis vocalist in the world" This is the one you pick, because there is no other even close, only the king himself.

Normally 2 sets of 45 mins but I can sing for longer if required.
I have the full Aloha From Hawaii concert ( all digital backings with orchestral bands ).
Over 1,500 backing tracks.
I can provide a show to suit your specific needs * ie what songs you would like in the show.
The song case I have is like none other.Many of the tracks I have are not your "every day" Elvis songs. I have backings for the real " die hard" Elvis fans.Everything is possible on my shows or "tailor-made" for you.

I am now 51 years old (but look 31 ) :)
I have been singing Elvis from the age of 11 years old.I was always the comedian in class, so I guess the stage life was meant for me. I never Imagined I would actually sound like Elvis as I got older back then, though even at that age I had a very "operatic voice".
In 1982 my father died when I was 15 and I left home on my 16th birthday to live with my sister in the countryside in Northampton.It took many years for me to get over my father's death as I was really only a kid at the time.
Along went the years with broken relationships and hard time ... s, as a lot of people experience, I am sure. I found that the only way to let go or let out all the pain was to sing.It is very hard to explain.Even as I sit here now I am trying to explain something, it is just very difficult.
So anyway from around 1996 I studied Elvis's voice for 6 or 7 years every day ! with just a headset on and listening to his concerts and hearing & actually feeling the love, the emotion the feeling, the heartake, the sorrow the pain in that mans voice.I became obsessed with getting it "spot on" I had to do it right, it had to be right or near as dam it.
So here I am the final product of all this hard work and love and admiration for Elvis. I want to give YOU the best.I have never been one of these guys who say " I am the best in the world" because they all say it and none of them really have the voice. *( I mean no disrespect to any Elvis Impersonator/tribute artists out there ) But I have to say it now, I think I am the closest you will ever hear anywhere in the world. I am just an ordinary guy with a big heart and within this heart is something I want to share with you.If you want the best Elvis, you are reading a message from him right now.If you don't like my show I will reimburse you the fee !.I cant be fairer than that can I.

30 years of being a professional musician/singer.
Largest audience over 500, 000 people in one venue.

Too many to mention.
I kept a diary but it was lost on moving home on several occasions.
Obviously, I have done many private functions. I made the center page on the Sunday magazine of the NEWS OF THE WORLD in 2003.
Del Monte ( food ) Wedding for the director's daughter at the Royal Academy of Arts London.
Zeplin Radio Denmark sang to over half a million people in 2009.
Special guest at the home of ( Elvis Gracelands ) by request a small show there for the staff.
Expat radio ( special guest ) FEB 2018

PLI insurance is applied before any event. Some events have their own insurance but private functions I take out a"temporary policy" that covers up to £500,000.
CRB Clean.Have worked for Surrey Police / Nat West Bank / Brittish Gas & have had more "prestigious contracts "