You are contacting Aliyah 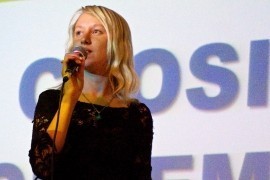 (no reviews)5.0
Country: United States
Based In: Brooklyn, New York
Performs: Worldwide
From: $200 a gig

Aliyah Jacobson has been singing since she was young in many different languages mostly following the countrywestern style and a little pop mixed in. She loves singing covers of Idina Menzel and Lady Gaga.
Request a Quote
Share this Page:
Profile Views: 509
Need Help?
✖