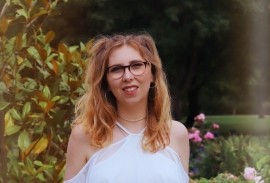 April Rose is a 22 year old professional, freelance vocalist based in London, United Kingdom. In 2020, she graduated from the Academy of Contemporary Music with First Class Honours in Music Performance.
Request a Quote
Share this Page:
Profile Views: 995
Report this profile

April Rose is a freelance vocalist available for studio recordings, live performances, and vocal coaching. She also has a full home recording setup to do remote recordings.
She also performs backing vocals for a range of artists, live and in the studio.
April Rose specialises pop, soul, jazz, disco, country, R&B and blues.

April Rose is a 21 year old professional, freelance vocalist based in London, United Kingdom. Specialising in pop, jazz, dance, soul and country.
She has grown her music career aplenty with various skills and experience from different avenues of the industry. In 2020 she graduated from the Academy of Contemporary Music with First Class Honours in Music Performance.
April Rose began gigging at fifteen where she developed excellent live performance skills that lead her to become the front woman of the versatile function band, Studio33.
Whilst being the band manager of Studio33, she also est ... ablished an guitar and vocal duo called Strings and Roses with her guitarist to gain further experience in the field of live performances and functions.
Alongside her successful function work, she is also a session vocalist, recording demos for songwriters alongside performing with artists such as DIASCIA and Naeve as a backing vocalist.

April Rose has been performing since the age of 8, with various choirs which lead her to perform in renowned venues such as the O2, the Palladium, and performing a solo at the Royal Albert Hall. Her passion for music continued to grow and after finishing school, as she carried on my musical education, studying music performance at college and University; recently graduating from the Academy of Contemporary Music with first class honours.
Her career has also taken her down various avenues in the music industry, including becoming the lead vocalist and front woman of the function band “Stud ... io33” and acoustic duo “Strings & Roses”. Alongside her function work, April Rose has also become a session vocalist, recording demos for songwriters and performing backing vocals for a variety of artists.

All equipment is PAT tested and April Rose has public liability insurance. All relevant paperwork can be presented on request.