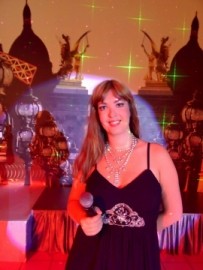 (no reviews)5.0
Country: United Kingdom
Based In: London
Performs: Worldwide
From: £180

Influenced by jazz, blues, rock, pop, classical music and opera she enjoys meeting musicians of all genres and performing in a variety of settings, whether that is with a backing track, as part of an acoustic duo, or with a big band. She regularly leads the 350+ people mass singalongs at the London Sunday Assembly in Conway Hall, and solos with the Sunday Assembly Jazz Collective.

The set-list consists of crowd-pleasers from the 1930s onwards and can be discussed and agreed with the client prior to the performance date(s). Examples of performed songs: jazz favourites such as My Funny Valentine and Summertime, soul and rock songs from the 60s such as Ain't no mountain high enough, Superstition and Proud Mary, disco tracks like I am what I am and Thriller, 80's classic rock like Sweet child o' mine and Don't stop believin' and family favourites like Under the sea and Happy.

The spawn of Moulin Rouge can-can soloists, I have always been a performer at heart. My mum, as a commercial singer and choreographer, used music of all genres for her shows. I grew up at home surrounded by the Beatles, Liza Minnelli, George Gershwin, Janet Jackson, John Barry, Quincy Jones, Dolly Parton, Tina Turner, Iron Maiden... My dad, despite being an ex-juggler and acrobat, hates "noise" and is more into Jacques Brel, Charles Aznavour and has a cheeky penchant for Petula Clark. Of course, I now love them all.
Aged 5, I was asked if I wanted to learn how to play the piano. Not even kn ... owing what a piano really was, but enticed by the word play I agreed... Cue years of difficult, emotional piano lessons at a local conservatoire with a "Whiplash" worthy teacher. We saw it through, but it was clear the piano was never going to be my northern star. However I did discover and learn to really love classical music.
Years later, with an arts & event management degree in the bag and after a few years of working behind a desk for classical music and opera institutions, I decided to rip the veil, set the dormant beast loose and work on my own musical projects. I'm really excited to sing more, sing better, hold onto my breeches and hope for the best. And... what better place to set the sails free than London?
Education
2017: Dartington International Summer School with Sarah Gabriel, Adriano Adewale, Jonathan Preiss, Carol Pemberton and Cecelia Wickham-Anderson
2017: City Academy Soul/Jazz Advanced with Abdul Shyllon
2016: City Academy Soul/Jazz Improvers with Abdul Shyllon and Rachel Bennett
2016: City Academy Beginners with Andrea Kempson and Donna Thompson
2014: Guildhall Conservatoire Jazz Weekend with Brigitte Beraha and Scott Stroman
2005-2006: Conservatoire in Soissons, France, with Essia Bey Lagoun