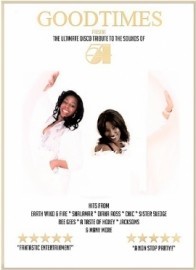 1
(no reviews)5.0
Country: United Kingdom
Based In: London, London
Performs: Worldwide
From: Contact

This ultra talented dynamic duo deliver the ultimate tribute to the disco hits of the 1970s and 80s delivered with audience participation, unstoppable energy, exciting choreography and outstanding vocals this is where the party is at!!!!!!!
: +3467126XXXX Click here to reveal
full number

When contacting this member, please state that you are viewing their Entertainers Worldwide profile.
Request a Quote
Share this Page:
Profile Views: 180
Report this profile

Hits Include:
Everybody Dance
You Should be Dancing
Car wash
Play That Funky Music White Boy
Disco Inferno
Freak Out
Rock with you
Hes the greatest dancer
lost in Music
signed sealed delivered
Upside Down
Love Hangover
Bad Girls
Hot Stuff
Shake your grove thing
Get down tonight
Boogie Oggie
Blame it on the Boogie
Shake your body down to the ground
Mighty Real
We are family
Frankie
Young Hearts
Thinking of you
Got to be real
Boogie Wonderland
Lets Groove tonight
Higher and Higher
September
I will survive
plus many more

Jenessa Qua and Belinda Mollokwu make up what is known as the 'dynamic (diva) duo' GOODTIMES. This formidable duo have performed across the U.K and Europe, entertaining audiences in festivals, Malta's Lapsi Festival, Germany's Jazztage Beer festival, as guest artists at Ronnie Scotts U.K and as backing singers for the late Colonel Abrams, D'Train and Light of the World at London's Indigo 02. With an impressive array of private events under their belt and summer seasons in Cypress, and Spain. Jenessa and Belinda are an entertaining force to be reckoned with, providing great vocals audience part ... icipation and choreography and dressed to the 99ths. Both have worked with an amazing aray of artists as individuals and have taken inspiration from these artists to form this exceptional duo. Jenessa has worked with many iconic artists personal favourites include: Chaka Khan and George Michael in the Queen tribute concert whilst Belinda's favourites include work with Kathey Sledge and Paul Mc Cartney on the 'Back in the world tour.' Both have acting credits and met when playing lead characters in 'Jack and the Beanstalk' Cambridge Arts Centre.