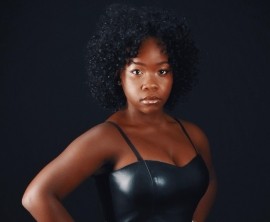 Mia Delamar, a rising star and “quint” essential threat, is a singer-songwriter, musician, choreographer-dancer. Having sung all over the nation Mia lives on the stage. With sound is similar to that of Brandy and Emili Sande she is sure to deliver all your vocal needs.
Request a Quote
Share this Page:
Report this profile

Mia Love Delamar was born on September 2, 1998, in Atlanta, GA. At just three weeks old Mia won her first beauty pageant, and at that very moment, her parents knew she was something special. At the tender age of two, Mia was put into ballet classes because her parents wanted to channel her outgoing energy. She was known as the child who could brighten up the room with her smile, and when her parents and family members asked her what she wanted to be when she grew up she replied '' A famous singer, actress, and dancer".
Most people thought that with age these dreams would change, but every t ... ime the question came up she would reply with the same answer. Ever since she could speak Mia has always been singing, and at the age of seven while watching the Grammys she turned to her parents and said "That's going to be me one day", and they never doubted her declaration. At the age of ten, Mia discovered her gift in songwriting, and once she found out she could write she really started to perfect her craft. The first "good" song, as Mia would put it, that she could remember writing was a song called "Sticks and Stones". At the time
this song was written Mia was going through what most kids go through in childhood, bullying. To Mia writing songs was an outlet for her to tell how she truly felt. Although never shy it was still hard for her to express herself to her bullies. At age thirteen she wrote another song called "Circles" and another at fourteen known as "Lunar Eclipse". Seeing her talent and love grow for the craft, at the age of fifteen her parents gifted her a studio session to record her first single for her upcoming sixteenth birthday. This gift was no small gesture. Through this process, Mia got to work with Platinum Record Producer JDub of DubzWorld Records. He believed in her gift so much so that he wanted to record an entire EP.
Years later Mia has continued her career in music and dance as a graduate of Belmont University. She now holds a Bachelors in Commercial Music Voice Performance and a Minor in dance. during her time at Belmont she was the Captain of 629, the school's dance team; A long-time member of the Belmont Dance Company, and of the Belmont School of Music Company Ensemble. Mia's EP Focus will be released in the Spring of 2021.

I offer 30-60 Minute vocal lessons via Zoom. If you want to grow in your craft or pick up a new hobby I can help you reach your vocal goals