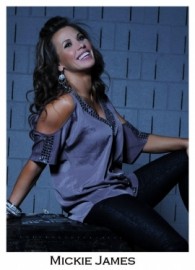 (no reviews)5.0
Country: United States
Based In: Richmond, Virginia
Performs: Worldwide
From: Contact

When contacting this member, please state that you are viewing their Entertainers Worldwide profile.
Request a Quote
Share this Page:
Profile Views: 5000
Report this profile

Mickie James takes her audience on a wild ride of a 'thrillbilly'; Original songs written and performed by Mickie from her Albums "Strangers and Angels and "Somebody's Gonna Pay' as well as fun and unique covers of some of her favorite songs by the likes of Joan Jett, Van Halen, The Beatles, Little Big Town, Tina Turner and more. Perhaps the most unique element of Mickie's live show is her stories from the road in her incredible career performing in front of millions with the WWE, which enthralls and entertains her audience regardless of whether they are wrestling fans.

Mickie Laree James has become a household name in professional wrestling and also the world of country music. Growing up in the state of Virginia, she was a tomboy who loved riding horses on her grandmother’s farm. Her love of the wrestling business was passed down to her by her father at a young age. She had dreams of being in the ring performing for fans all over the world and eventually she lived that dream. James began her professional wrestling career in 1999 under the name of Alexis Laree.
After making her mark on wrestling's independent circuit she debuted on the national stage b ... y working for Total Nonstop Action (TNA) in 2002. In 2003 she signed a developmental deal with World Wrestling Entertainment (WWE) where she trained in Louisville, Kentucky.
In late 2005 she made her on screen debut for WWE and would go on to win her first Women's Championship at WrestleMania 22 in Chicago after a very memorable feud with Trish Stratus. Her WWE career saw her capture the Women's Title five times and the Divas Title once. Her combined six championships in WWE are second only to Stratus.
In October of 2010, Mickie returned to TNA Wrestling. Her goal was to become the first woman to win WWE's Women's & Divas titles as well as TNA's Knockouts Title. In April of 2011, she accomplished that goal by defeating Madison Rayne in a steel cage match to become TNA's Knockouts Champion. She went on to win TNA's Knockouts Title three times.
While Mickie's wrestling career continues, music has always been a passion for her as well.
"I had played the violin for five years in school. I would walk around the house with a boom box recording myself and give the tapes to my mom. I don't really get the chance to watch TV, so I listen to music all the time. I would write down the melodies in my head and the feelings I had in lyrical form."
In 2009 she began to pursue her dream of recording a country music album. While on the road with WWE, Mickie would travel to Nashville on her days off to meet with producers, songwriters and vocal coaches to perfect her craft.
In the spring of 2010, Mickie released her first album entitled Strangers and Angels. The eleven song album features three songs that Mickie co-wrote: "Hollywood Movie Moment," "No Good at Pretending" and "Don't Apologize." The first single released off the album is a fast paced, exciting track called "Are You With Me?"
How does she compare the two art forms? Mickie explains: "In the ring, fans see this kick-butt girl who is full of energy and full of life, someone who is ready to kick butt and take names. My music is like a whole other side of me that fans and people in general necessarily wouldn't know."
Mickie's albums have received positive reviews from publications such as Country Weekly, CMA Magazine and led to TV appearances on Fox & Friends and Red Eye. Mickie has also shared the stage with other country music recording artists such as Rascal Flatts, Montgomery Gentry, Gretchen Wilson and Randy Houser among others. She's performed in concerts all over the world and also performed at the CMA Fest as well.
After signing with TNA Wrestling in the fall of 2010, Mickie also released a single track that is also her entrance music: "Hardcore Country." How did that process come about? In Mickie's words: "Everything in wrestling seems to be hardcore, so to me it seemed too easy. They had talked to different people and they were looking at it from the country music side where you’ve never heard of Hardcore Country before. The more I listened to it they were right. It works. It’s a badass song."
In May 2013, Mickie released her second album titled Somebody's Gonna Pay through Entertainment One Music. She wrote three of the songs on the album entitled Best Damn Night and 80 Proof. In addition to that, she also did a music video for the cover track Somebody's Gonna Pay that co-starred fellow professional wrestlers Trish Stratus and Nick Aldis (Magnus). 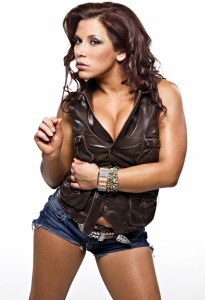 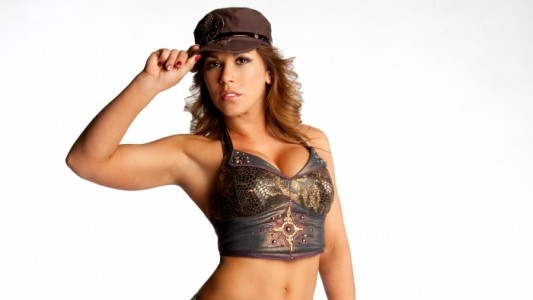 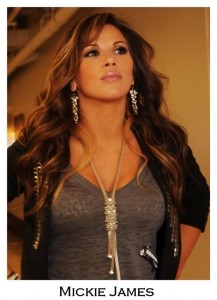 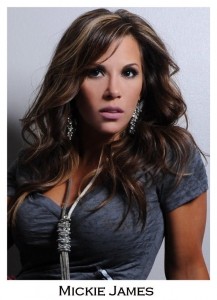 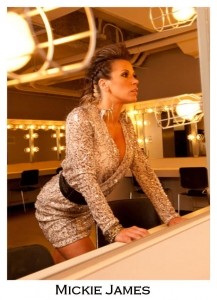 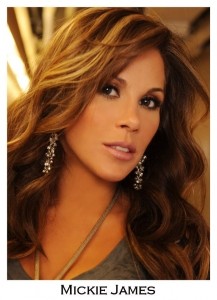