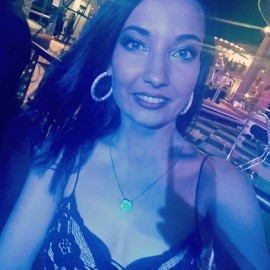 1
(no reviews)5.0
Country: Russia
Based In: Moscow, Russian Federation
Performs: Worldwide
From: Contact

Hello!
My name is Mirgayazova Almira Masgutova. I am from Russia. I am a professional singer.
I was born on February 23, 1989, in the city of Ufa, the Republic of Bashkortostan in Russia, my nationality is Bashkir.
My family moved to Novosibirsk, where I graduated from high school 11 classes in 2006. Immediately after graduation, I entered the Novosibirsk musical College under the name of A. F. Murov, classical singing. Successfully graduated from College, 11 June 2010. I received the diploma with the qualification of an artist of the academic choir and ensemble. In the same year, I ent ... ered the Moscow Academy named Maimonid, the faculty of the world music culture of jazz singing. 7 July 2015 I graduated from the Academy and received a diploma with honors.
I have been doing singing since I was four. It is dancing and acting skills and stage speech. As a child, I went to various cultural centers of the peoples of the world who allowed me to sing in different languages without an accent and to explore the most famous songs of different nationalities. I sang songs in Tatar, Bashkir, Hindi, Hebrew, Yiddish, and Ukrainian, not to mention English, German, French and Italian. Also had to sing for the Ambassador at the Embassy of Malaysia in Moscow in the Malaysian language. I have extensive experience in anniversaries, weddings, and corporate events. The national holidays such as the Tatar-Bashkir national holiday "Sabantuy" and Muslim holiday "Nikah". When I studied in Moscow in the fourth year of the Academy, in December, I became a finalist of the contest in the city of Kazan Turkvision-2014, where I sang the song in the Tatar language.
As for the Jewish holidays, since childhood, I often played on traditional Jewish holidays and I have an extensive repertoire for each of the holidays "Rosh Hashanah", "Chanukah", "Purim", "Passover", "Sukkot", and songs which is singing on Shabbat.
In 2017, I was in Japan where I have successfully worked under the contract. I was singing with an acoustic band in English, Russian, Italian, Jewish, Yiddish, Spanish and Japanese songs. Also, I started to learn the Japanese language. When I was in Japan, I sang in the Church in Hebrew, and it was great.
Now I am working in Celebrity. I am a singer in a musical band. I already had two unbelievable contracts at Celebrity Summit and Celebrity Constellation. And I would like to continue my singing experience. Also, I would like to be enjoyed by a team of Celebrity Entertainment and improve my skills.
A musical for me is more than singing; it combines songs, conversational communication, acting, and dancing. In particular, the musical attracts me with its emotional content - humor, pathos, where love and anger, joy and sadness are combined!
Hope for the invitation to work together.
All the Best! Almira Mirgayazova.