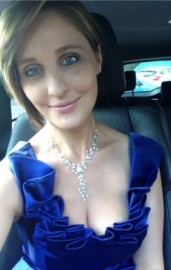 (no reviews)5.0
Country: United Kingdom
Based In: South East
Performs: Worldwide
From: From £250

I am a versatile and trained solo singer. I can provide anything from a laid back jazz set to full on party tunes with plenty of audience interaction.
Request a Quote
Share this Page:
Profile Views: 359
Report this profile

I offer several choices of shows from Jazz and Show tunes to Disco, Pop and Soul. My shows include costume changes and plenty of audience interaction when appropriate. I use my years of experience to build dynamic set lists to give each client exactly what they want. I am also happy to take requests as my vast repertoire means I can usually deliver.

I am a Singer, Vocal Coach and Principal of two branches of Starcast Performing Arts Schools. I have been performing professionally for over ten years. I have worked for a variety of function bands, have played both Agnetha and Frida in an established Abba tribute and also manage my own band called Funk Soul Sista. I am a fully trained singer and vocal coach with years of performance experience which allows me to gauge each audience and give them a great time.

Member of female trio called Beautiful Contradiction playing at various events such as Military functions, weddings and private parties.
Lead vocalist in a pop choir and performed at venues such as The London Palladium, Southampton Mayflower and Salisbury City Hall.
Played Agnetha and Frida in established Abba Tribute. Travelled all over the UK performing at weddings, corporate functions and various clubs and restaurants.
One third of live funk band, Funk Soul Sista and have performed at various weddings, parties and music bars.
Founder and performer in Ladies Night Live, a tribute to all ... Girlbands from 60s to present day. Performances at local music bars, Salisbury Playhouse and private parties.
Founder and Musical Director of the Evolution Show Choir. Performed at various charity functions, fetes, and Christmas light switch on ceremonies as well as sold out audiences at Salisbury Playhouse, Southampton Mayflower and Swansea Grand Theatre where we performed alongside Louise Dearman and Rhydian Roberts.