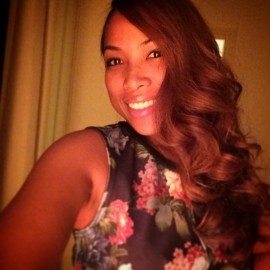 When contacting this member, please state that you are viewing their Entertainers Worldwide profile.
Request a Quote
Share this Page:
Profile Views: 585
Report this profile

I can perform as a solo artist, as an integrated lead singer in an all-set backing band or as a backing vocalist supporting a major artist.

Nataly Andria,is a Madagascan-born, French singer, songwriter, producer and dancer. She was a finalist, among thousand contestants, on the first local season of an American Idol -inspired TV Show in Madagascar, called Pazzapa.
Nataly was born in Antsirabe, Madagascar, from a mother descendant of the Royal Family, and a father who was, originally, a singer/guitar player, but then turned to a more classical way of life, by working in the national Oil and Gas company, in order to provide more stability to their five children.
As a youth, her father, who was the leader of rock n’ blues ban ... d the « CCC guitars », taught her about Jazz music and Blues Music. She developed her skills of playing the guitar with two of her brothers, both founded the acclaimed band L.A Doudh and was awarded as the best alternative rock band in Madagascar in 1998. She learned various genres of music through her musical household.
Nataly rose to fame by being the finalist among thousand contestants, in 2003, of the nationally broadcast TV Contest show Pazzapa. Her first single, in her mother tongue, « K’atao ahoana moa », released just right after the TV show, brought Andria to the position of a valuable and notable young artist of the nation.
Nataly, then, moved to France and pursued a degree in Economics and Management at Université Paris Ouest Nanterre La Défense, with majoring in Finance and Banking. She is fluent in four languages: Malagasy, French, English and Spanish. She is currently still living in Paris and has been naturalized as a french citizen in 2015.
In 2008, she met the French DJ Sims off Now Futur, who produced her first EP Out of Stage.
In 2010, she went back to Madagascar for few months and stayed near her mother who was suffering from a cancer. Most of her songs included in her EP « Something New », released in 2013, were written and produced during that stay.
Andria left the indie record label Kulture Label just right after the release of « Something New » and started to work with an other indie record label named Be Live Records in 2014. She is currently working on her debut album. Meanwhile she multiplied collaborations with various artists from different backgrounds on different side projects, such as French DJ Ilo Bosco or her duet with Joel Rabesolo in the band « The GasyQuarians ».
She released her single « Used 2 » (feat. Ilo Bosco) on Sept. 7th, 2015 and has announced at the beginning of year 2016, the release of new music during the ongoing year.
Aside from singing, Andria has made her debut as an actress in a short movie in 2011, directed by french female director, Atika Belhachmi. Nataly played the character of a nurse in « Sens interdits« .
Lately, she started co-hosting various talk-shows on different french TV channels, broadcasted in Europe, Africa and West Indies as a Music specialist.
Nataly also writes reviews as a music columnist for various online magazine and blogs, and is very active with We Bloomish Magazine.
All of the work she is involved in doesn’t prevent Nataly to keep continuing her work as a philanthropist, encouraging people to be more aware about environment issues, as a United Nations Volunteer.