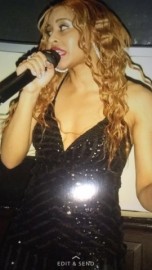 (no reviews)5.0
Country: United Kingdom
Based In: Wembley, London
Performs: Worldwide
From: Please contact for quote

Natasha Amina Defoe also known as (Natasha Amina), is a British singer/songwriter and dancer from North West London. Her sound has been described as R&B combined with soul and Pop. Natasha was born in Willesden her ethnic Background is Moroccan and Dominican, Natasha studied performing arts at City Of Westminster college in London. She went on to perform in a production of “Chicago” at Tricycle Theatre London, Natasha then started her own dance group called “Energy”, choreographing her own routines and entering into various talent shows such as Britain’s Got Talent and charity events ... .
For three years up to 2015 Natasha Performed in various prestigious locations with a group called “The Felinez”. Natasha then joined a private group called “RNP”( Reason And Purpose) in which she wrote music and collaborated on other artist songs, she was later introduced to Max Millz at “Rebel Nature Entertainment” in 2015 where she started working and collaborating on various songs as a feathered artist. Natasha was then given the opportunity to start working on her own solo project 11 months later Natasha has now released her first debut Single and Video “Cant Keep Away”, from the EP “(In-Fact-U-Hated). Excepted later this year 2017 on Rebel Nature Entertainment.