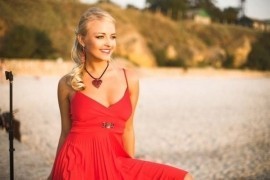 Versatile singer Raisa is working for 5 star hotels (Grand Hyatt, Shangri – La) worldwide. She is capable of delivering the great tunes of our time in English, French, Italian, Spanish, Portuguese, Russian, Ukrainian, Polish and even in Chinese.
Request a Quote
Share this Page:
Profile Views: 572
Report this profile

Raisa was born and raised in the beautiful city of Odessa, Ukraine.It was very easy for her to fall in love with music and become a singer. The city located near the Black Sea has always been famous for it`s music scene, jazz carnivals and festive attitude. Her parents roots are both Russian, so growing up she spoke Russian and Ukrainian languages, later on she started to learn English and French. She began singing, dancing and taking piano lessons at a young age and attended music school at the age of seven. In 2001 she attended music college to study jazz vocals. The artists that influenced ... her most during her studies were Dee Dee Bridgewater, Ella Fitzgerald, Barbra Streisand, Lara Fabian, Celine Dion, Laura Fygi, Stevie Wonder, Michael Buble and others. After graduation in 2005 she was chosen to perform in the amusement park in Seoul, South Korea. After that she was traveling and working all over Europe (France, Italy, Greece, England, Norway, Sweden, Helsinki, Russia etc.) In addition, she has also lived and worked in the California USA for 2 years. Since 2010 she is working for 5 star hotels (Grand Hyatt, Shangri – La) worldwide. She is capable of delivering the great tunes of our time in English, French, Italian, Spanish, Portuguese, Russian, Ukrainian, Polish and even in Chinese.