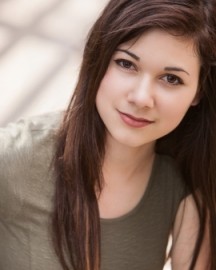 I’ve been singing for 18 years and am passionate about telling stories through this art form. I’ve also done professional theatre, voiceover, songwriting, arranging, and film/TV acting.
Request a Quote
Share this Page:
Report this profile

Talon David is a recording artist and songwriter based in Nashville, TN. As a child, she had the hardest time figuring out what to say to people, but she learned early on that when she was singing, she didn’t have to struggle so hard, and she could touch people on an emotional level. This opened up a whole new world of communication for her. It was a natural result that Talon would start songwriting, and in 2017 she got to attend the 59th GRAMMY Awards as the winner of the GRAMMY Foundation’s Teens Make Music Contest for her song “Deep Snow.”
Since then, Talon has continued develop ... ing her craft in Belmont University’s Commercial Music major. Her influences span from Ella Fitzgerald to Journey to Adele. As she moves forward in her career after graduation, the dream would be to travel the world, singing and encouraging people that they are not alone in their troubles. And no matter the extent of pain, there is always hope. This is an adventure you do not want to miss.

Talon David - Female Singer - Nashville, Tennessee Event Location: Franklin, TN Event Type: Variety Performance 27th April 2019
Performing Arts Director at Williamson County Performing Arts Center June 26, 2019, Victoria managed Talon directly Talon is an amazing talent and sings with such heart and soul. It was a such a pleasure directing her in the Belles of Franklin. It was also a great joy to listen to her sing. Naturally gifted but hard working, Talon brings magic to her craft. I look forward to watching her career blossom as she will have a successful one!
Reviewed by: Victoria Reed
Talon David - Female Singer - Nashville, Tennessee Event Location: Hendersonville, TN Event Type: Theatre Production 21st September 2018
Founder - Artistic Director at Actors Point Theatre Company Principal at TenKen Film June 24, 2019, Greg managed Talon directly Talon is the consummate pro in her attitude and work ethic. Her singing is off the charts amazing. As an actress she is a force! She has a servants heart and wants to serve all that she works with and is tenacious about telling the story! Thanks Greg Wilson Artistic Director Actors Point Theatre Company
Reviewed by: Greg Wilson

I have my own home studio for recording vocals and voiceovers. Equipment includes: RODE N1A condenser microphone, Scarlett Solo interface, Eris speakers, and Logic DAW with assorted plugins. I am able to provide high quality work with a quick turnaround :)