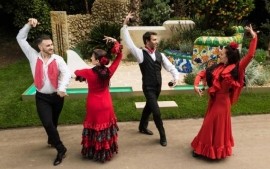 1
(no reviews)5.0
Country: United Kingdom
Based In: Wandsworth, London
Performs: Worldwide
From: Contact

Viva Flamenco is a truly international dance group and company that has entertained audiences all over the world, from Ipswich to Indonesia - Guildford to the Gulf
Request a Quote
Share this Page:
Profile Views: 1747
Report this profile

Viva Flamenco is a flamenco group and dance company that is based in London in the UK. They travel all over the world performing in a variety of venues, including theatres, festivals, major hotels, corporate functions and private parties. Workshops and private tuition are also provided both in the UK and in Spain - in Dance, Guitar, Singing, Palmas (hand clapping), Castanets and the Cajon.
Viva Flamenco is a truly international dance group and company that has entertained audiences all over the world, from Ipswich to Indonesia - Guildford to the Gulf. In addition to numerous world-wide tele ... vision programmes and film credits, London venues include the Royal Albert Hall, the Royal Festival Hall, the Barbican.
Juan Ramirez, the company's artistic director and principal guitarist has recently collaborated with
the legendary film star Christopher Lee on his album "Revelation", CD and DVD now available and more recently, on the heavy metal album, "Charlemagne, By The Sword and The Cross". Also, Juan has recently released his own album "Viva Flamenco Live".
Viva Flamenco have also performed as a twenty piece company in the world's biggest production of the opera Carmen at the National Indoor Arena in Birmingham and also in Dortmund in Germany. Any size group or company can be provided, as well as individual artists, e.g. solo guitarists, dancers and singers. 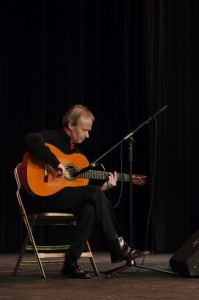