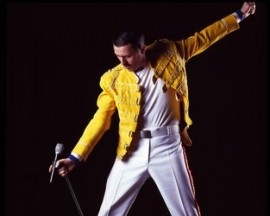 Dean Richardson is Freddie Mercury. In his act, he recreates the image, voice and flamboyancy of Freddie. Headlining Trevor Chance's Legends, and a firm favourite in the cruising industry, Dean performs his amazing tribute worldwide.
Request a Quote
Share this Page:
Profile Views: 1408
Report this profile

Dean Richardson as Freddie Mercury faithfully recreates the image, voice and flamboyancy of the great man himself. Audiences are always left amazed by the authenticity and intricate detail Dean puts into each and every performance.
From the moment the music begins and the lights pulsate, Dean explodes onto to the stage and from then on, the energy and exuberance never stops flowing. From the stunning vocals to the mannerisms, from the outlandish costumes to the moustache, it's all there to ensure that the audience have the very best experience.
Dean Richardson as Freddie Mercury solo ... show is available as a fully self contained tribute act and also with full band parts for cruise work and more.

Dean comes from from a musical family, his mother was a headline act in Cumbria during the club years, and her mother before her. With many musicians in the family it was inevitable that one day Dean would also play his part on stage.
He began playing the piano at the age of 7 and also attended the Yamaha School of Electronic Music. During his school years he would perform in local hotels in his hometown of Morecambe to residents, this experience would set him in perfect steed for his transfer to Blackpool's golden mile in later years.
Although talented both musically and vocally Dean or ... iginally pursued a 'proper career', and his studies lead him to attain a degree in Accounting and Finance. While studying Dean continued to dip his toes in the 'business' and sang whenever his studies allowed. He appeared at the Summerbreeze fesitval in front of 20,000 people and has supported many acts in his early career including 911, Alexander O'Neil, Leo Sayer, Tony Hadley, Edwin Starr, Rose Royce, Jackie Graham, The Pasedenas to name but a few. He also appeared on MTV's flagship programme 'MTV Select' hosted by Donna Air, after winning their national competition to find new talent.
After graduating Dean worked for a local newspaper group and it was there; after many auditions he was chosen out of over 6000 applicants to be one of five contestants to appear on BBC's Star for a Night hosted by Jane McDonald. This was aired on BBC1 on a Saturday night in their prime time slot in front of 12 million viewers attracting the attention of a host of talent agents including theatre impresario Bill Kenwright.
It was at this point Dean took the decision to follow his dream and jump in with both feet into showbusiness. Now based in Blackpool, Dean was much sought after on the circuit performing all across the coast and beyond. He has been the opening act on the North Pier's summer show, headlined a production at Blackpool's famous Opera House where the likes of Frank Sinatra, Judy Garland and other famous names have tread the boards. Entertained the crowds with Danny La Rue in Blackpools Tower Ballroom and even performed at the Blackpool Christmas Lights switch on.
After almost ten years on the circuit under his own name, and after a little pursuasion from his great friend and Brian May lookalike/playalike, Dean became the Freddie Mercury tribute you see before you today.
After teaming up with an already successful Queen tribute band Dean perfected his art over the following months playing in various venues up and down the country. It was at this point the producer of Blackpool's longest running and most successful show – Legends, was to get in touch. Dean has since enjoyed very succesful consecutive summer seasons in it's principal role; firstly at the Central Pier and now at their new beautiful home – The Sands Venue.
In addition to Legends, Dean enjoys performing at a variety of locations and events both big and small here in the UK and also regularly flys to hot spots across the Mediterranean and further. He also has recently secured some fantastic cruise contracts which he is looking forward to perform on. 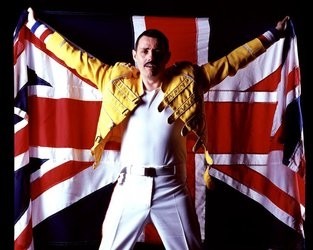 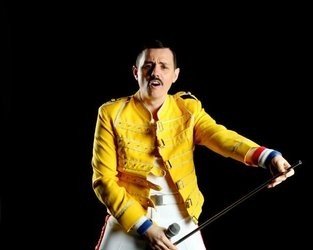 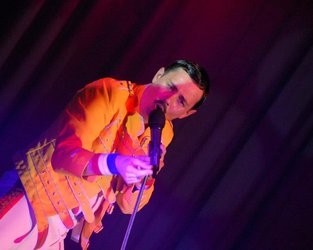 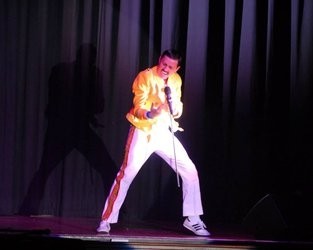