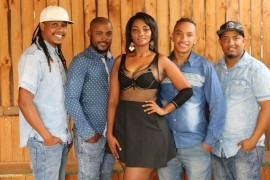 We are the band COLDSWEAT each and every one in the band are very hard working musicians
Request a Quote
Share this Page:
Profile Views: 413
Report this profile

The band consist out of 5 members 1 female vocal,1male vocal and 3 band members bass guitarist,keyboard player and drummer.the type of music we just to mention a few reggea,pop,rock,rnd,jazz,african soul and neyo soul and many more.

We the band called COLDSWEAT we from CAPE TOWN,SOUTH AFRICA we all have come along way we have been together for 7 years we a band that love what we do and that to entertain people all over.the band members are 7
Jerome webb-(band leader and keyboard player)
Ruaan lewis-(bass player)
Hendry hendricks-(drum player)
Sariefa maarman-( female singer)
Rhyno domingo-(male singer)
The band have backed serval artist like NATALIA DE ROSI,JONATHAN RUBAIN,EMO ADAMS,LOUKMAAN ADAMS.
three band members have work abroad witch is SARIEFA MAARMAN who worked in DUBAI AND BUGRAIN,JEROME WEBB work in MAL ... AWI with JAMAICAN REGGEA ARTIST LUTAN FYAH and HENDRY HENDRICKS also work in DUBAI AND USA
The band is a very easy and hard working band to work with