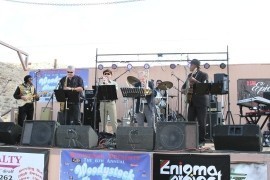 (no reviews)5.0
Country: United States
Based In: Beverly Hills, California
From: $3000

We are a septet consisting of Piano, Guitar, Bass, Drums, Trumpet, Trombone and Saxophone. For most jobs, we have a minimum of 3 part harmonies, to 5 parts. We play high quality jazz, funk, r&b, blues, rock, country, cajun and zydeco styles of music.
Request a Quote
Share this Page:
Profile Views: 250
Report this profile

We write and arrange songs whether original or cover songs for your occassion. We also do themed events. For example, if you want a 40s, 50s, 60s, 70s, 80s, 90s, or Millenial act type of show, we dress the part, have period instruments, set the stage in your preferred period style, perform period songs for that decade, or do a mixture of songs, as you may require.