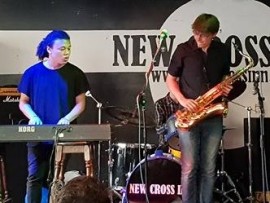 Brimming with energy, we are an experienced party band with a broad, crowd-pleasing repertoire of over 250 songs. We are conservatoire-educated, highly professional and well-rehearsed with a polished sound.
: 0780521XXXX Click here to reveal
full number

When contacting this member, please state that you are viewing their Entertainers Worldwide profile.
Request a Quote
Share this Page:
Profile Views: 333
Report this profile

The Reeds are available to hire as a duo (Voice/Guitar/Saxophone and Keyboard), a trio (plus Drum Kit) or a quartet (plus Bass Guitar).
The Reeds were formed in the Autumn of 2016 by a group of music college graduates. Since then we have been gigging at least once a week at parties and events around London including our regular 3-hour slot at the Admiral Hardy in Greewich, London on Thursday nights. Consequently we are well-rehearsed, highly-experienced and ALWAYS able to get an audience excited.
To hear highlights from our live sets, visit our Youtube channel:
https://www.youtube.com/p ... laylist?list=PLSQZm0jwo609TfNZLpzNAPOS_StHLFsPd
We have also recorded an EP of original songs written by our guitarist and front-man Will Howarth. You can hear 'Surrogate Home' by The Reeds here:
https://youtu.be/XJT8D9JQe1k

Popular music, well-known songs and crowd-pleasers from the 1960s through to the present day.
We have an ever-expanding setlist of over 250 songs in many different styles.
Rock, pop, soul, reggae, ska, punk, R&B, funk, jazz, progressive, samba, blues.
WE TAKE REQUESTS! 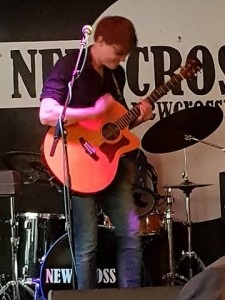 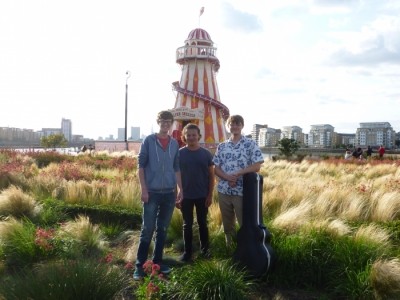 - Weekly 3-hour slot every Thursday night at the Admiral Hardy in Greenwich.
- Two performances at The New Cross Inn.
- Three performances at The Bird's Nest, Deptford.
- Bandeoke night at The Basement near Barbican.
- Countless hours busking around Greenwich.
All members of The Reeds are classically-trained professional musicians with years of performance experience with other groups and ensembles prior to the formation of The Reeds. Venues include Jamboree in Limehouse, The Duke in Deptford, 20th Century Theatre in Notting Hill Gate, Blackheath Concert Halls, the Sigmund Freud Museum ... in Finchley, the Horniman Museum in Forest Hill, Fairfield Halls in Croydon, Trinity Laban Conservatoire in Greenwich, Royal Academy of Music in Marylebone.

All members of The Reeds have spent four years studying Music in higher education and hold BMus degrees in their respective instrumental disciplines.