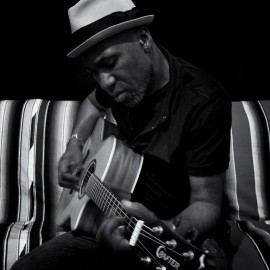 (no reviews)5.0
Country: United Kingdom
Based In: Greater London, London
Performs: Worldwide
From: £250

When contacting this member, please state that you are viewing their Entertainers Worldwide profile.
Request a Quote
Share this Page:
Profile Views: 422
Report this profile

Adé is a solo acoustic performer. His repertoire spans Jazz, Soul, Classic Pop and Blues. He has performed in London and Europe, both as a solo act and with groups.
Adé mainly performs in the role of background music act. He appreciates that people essentially want to socialize/converse with family, loved ones and colleagues, and therefore provides a subliminal live performance that hopefully enhances people's socializing experiences, whether that be dining, or relaxing at a lounge or bar, or networking/relaxing with colleagues at events. Clients are the main act, not Adé.

Adé is an experienced musician, having performed extensively in the UK (mainly London) and Europe. He has worked as a session and touring musician, and worked with some of the UK's most successful Soul/Pop artists and songwriters including Omar, Heatwave, Shola Ama, Michelle Escoffery, Martine Girault and producer Ray Hayden. He currently mainly works as a music producer and songwriter.