You are contacting Anugrah James Anand 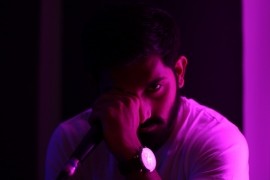 (no reviews)5.0
Country: India
Based In: Agra, Uttar Pradesh
From: Contact

Anugrah is a singer, composer, and producer from Agra, India. He has released two singles in 2020 and is currently working on the production of an album. Recently he got signed up as a music director in an upcoming web series produced by Spaceturtles Films.
Request a Quote
Share this Page:
Need Help?
✖