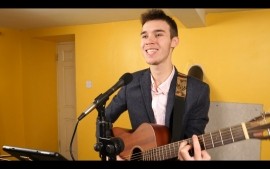 (no reviews)5.0
Country: United Kingdom
Based In: Londonderry, Northern Ireland
Performs: Worldwide
From: £1500

I'm a 22 year old solo Guitarist/Vocalist who has been performing since the age of 12. With a repertoire of over 150 songs. My styles include Pop, folk, blues/rock and Country.
: 0792690XXXX Click here to reveal
full number

When contacting this member, please state that you are viewing their Entertainers Worldwide profile.
Request a Quote
Share this Page:
Profile Views: 243
Report this profile

I am a 22 year old Guitarist/Vocalist from Northern Ireland. I love performing, it comes very naturally to me, I've been performing since the age of 12. I have recently graduated from The University of Kent, England with a Upper Second Class honours in Popular music. Over the three years I was continuously graded in performing. I understand what good stage presence is and have an appreciation of what the audience wants to hear. I try to tailor the songs I play for the crowd that is listening. I am experienced in many different tourism roles, working at tourist sites in Northern Ireland so I un ... derstand what is required from a customer service role.

I have been playing guitar since I was the age of 12 and started performing in pubs and bars by the time i was 15. After i left school I realised that i wanted to study music in college. During my time at North West Regional College, where i studied for my extended diploma in popular music, I formed many different bands and covered a wide variety of genres. As well as taking part in street busking regularly. I have performed at such venues as The Academy, Dublin and Sandino's Bar, Derry.