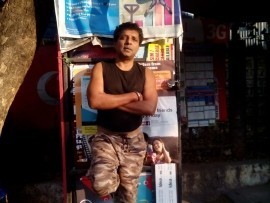 I have sung with all leading Indian Rock bands from Chennai and Mumbai around the early to late 90's . Some of the bands and artist I have sung with have won international acclaim , like ROCK MACHINE ( Mumbai ) which won many recognition as the band INDUS CREED also performed with Oscar winning Indian composer A. R . RAHMAN in our band NEMESIS AVENUE. After releasing my album with BMG which was critically acclaimed by national press as amongst the best from India I went traveling to Europe singing in weddings and small events apart from Pubs. I have just started singing again with my guitar a ... nd have taken the stage name CRAZY CHANDRAN.

Share this Page:
Click here to view all of our Guitar Singers on Entertainers Worldwide
Browse all Entertainment Hire options!