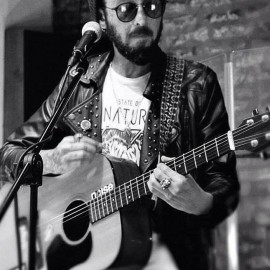 (no reviews)5.0
Country: United States
Based In: Miami, Florida
Performs: Worldwide
From: Contact

Danny Guerrero: Singer, Musician/multi-instrumentalist and songwriter who's been traveling and sharing his particular way to perform music as a BandMan! Youtube channel: GuerreroMusic
Request a Quote
Share this Page:
Profile Views: 128
Report this profile

I'm a solo artist but like bandman, I can sing & play guitar or ukelele using tools like looper, effect pedals and a kick or tambourine at my feet, also I play the Harmmonic, my show includes Rock N' Roll, Mainstream Pop, Blues, Country & Folk and Reggae covers performed with my personal touch, energy and passion, I sing mainly in English but I have a few songs in other languages as Spanish, Portuguese and French.

I've been performing music more than 10 years, traveling and playing for Pubs, Hostels, Restaurants and more, cities and countries in Colombia, Ecueador, Peru, Mexico and USA,