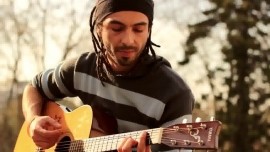 (no reviews)5.0
Country: Argentina
Based In: buenos aires, Argentina
Performs: Worldwide
From: Flights or bus + Hotel or house The cash for perform depends the kind of gig

Naked songs its a cover show Walking the big hits of rock along the story , just with guitar and voice for the public to enjoy in addition to appreciate the very soul of the songs
Request a Quote
Share this Page:
Profile Views: 335
Report this profile

"Naked Songs" is a show that runs a selection of classic threads
International rock; Spanning a wide repertoire which includes creations of bands like The Beatles , The Doors, Nirvana , Bob Dylan, Bob Marley, John Lennon, David Bowie, George Harrison , Fito , Calamaro, Aerosmith ; among others.
The songs are presented in acoustic format (guitar and vocals) .
Through this format show an intimate and interactive environment through which the viewer can see the soul of these famous songs , trying to bring the issues to the perhaps most basic forms ; or perhaps more profound expression , in the ... same manner in which they were conceived.
The repertoire contains more than 70 songs .
This show was presented by the artist with an incredible public acceptance in Buenos Aires , Istanbul, Paris , London, Majorca and Barcelona . And both the artist and the show are a guarantee of professionalism , seriousness commitment , talent and art

Diego arroyo is an argentinian songwriter.His songs have a greit rock and roll style and make fusion with anothers styles like country, indie or reggae. His musical influences goes from Dylan, The Beatles or Bob Marley to Nirvana and Alice in Chains. Perform tours in Buenos Aires, Spain, France, Turkey and England in 2012 has taken part in tribute albums to nirvana during 2013. in 2014 returned to the road with his single peace song and his first English language single "civil war" with the support of independent label Under Submarine Records, One of the most promising songwriters of the Argen ... tinian under scene
(MTV bio 2014)
Mas info: www.facebook.com/diegoarroyo
http://www.youtube.com/watch?v=5g3c3IJwPIU
https://itunes.apple.com/ar/artist/diego-arroyo/id797871057
www.diegoarroyo.tk

I also have 2 more shows.
The best acoustic show in south america.
Bob dylan, bob marley, beatles, the doors, foo fighters,nirvana,arctic monkeys, and a lot more.
And for Spain public i have another show, with covers of Estopa, Fito y fitipaldis, Sabina, serrat, melendi, los delinquentes, macaco, and others.
I also can play with a band like guitar and make chorus.