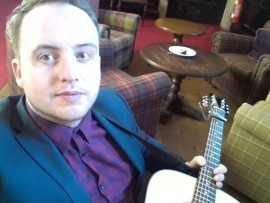 Hi, I'm Greg.
I'm an acoustic guitarist/singer from Manchester, UK.
I've been referred to as the 'Human Jukebox' in the past, and can play well over 200 songs from memory. I can learn within minutes (I've sat in my car learning songs that people have requested so I can go back in and play them!) and can easily adapt to any requirements.
My speciality is smooth, easy listening acoustic music. I've played in the corner of wedding drinks receptions and dinners and guests have commented how nice it was to have the music in the background. I've played in restaurants and bars, and can just as ... easily crank up the volume and play a few sing-a-longs as I can sit and play sweet love songs in the background!
I am the lead singer of a rock covers band, but love to go solo and get the acoustic guitar out.
I play anything from 50's rock n roll, to modern day pop music. From Chuck Berry to Olly Murs! My own musical tastes stem from the 90's, and I can play any Oasis song from memory! I can easily switch genres, from motown to disco, from classic rock to punk rock. I don't think many can say they've ever heard an acoustic version of the disco classic 'Le Freak' by Chic but it's in my repertoire!
It's always been a dream to play on cruises or abroad, so any work would be considered.
If you need a singer/acoustic guitarist for any occasion, then I'm your man!

Greg Foster, singer/acoustic guitarist.
Born in Manchester, UK, Greg comes from a musical family with his father having played bass in several 70's rock bands including Montrose featuring Sammy Hagar, later of Van Halen fame.
Gregs musical spark was lighted in the mid 1990's when at the age of 15, he heard the Oasis album 'What's The Story (Morning Glory)'. 'That was really the turning point' says Greg. 'Hearing the opening chords of Champagne Supernova and Cast No Shadow, I realised I wanted to pick up a guitar and never put it down!'.
Gregs musical taste became varied, with classic r ... ock, motown, disco and punk all playing a huge part in his musical schooling.
Greg played in several unsigned rock bands throughout the 2000's, however he found his comfort zone when asked to play a covers gig in 2009. 'All of a sudden it made sense! I'd been seeking musical stardom with original material for years but I played other people's music and suddenly realised this was for me!'
Since then Greg has played many solo and band shows, including weddings, birthday parties, christmas parties and corporate events. In 2014 Greg and his band were joined onstage by Iron Maiden's Nico McBrain at a huge corporate event, with Nico playing 5 songs with the band. 'That really was the icing on the cake! To have a world renowned musician join me onstage, I realised how far I'd come!'
Greg will continue to play and entertain thousands of people in future, and can honestly say he'll be rocking into his veteran years! 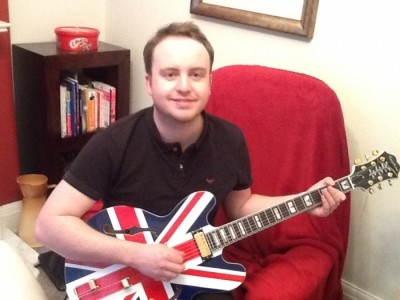 Over 50 Weddings/Corporate Events, Over 500 bars/pubs!