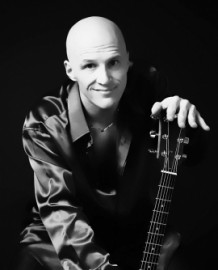 (no reviews)5.0
Country: Canada
Based In: Canada, Quebec
Performs: Worldwide
From: 4000$

Aside from JOHN WARNER’s more eclectic, contemporary repertoire, it is the wireless equipment he uses that separates him from the Traditional Mariachi type Minstrel. Traditional Minstrels rely on the acoustic reverberation of their instruments and the projection of their voice(s) to be heard. This however can create 2 main problems:
• Their playing style is confined to strumming which suppresses the harmonic potential required to properly render such mellow styles as Jazz and Bossa nova.
• They are compelled to sing louder in order not to be drowned out by the ambient noise.
JOHN ... WARNER’s playing technique is known as “Finger style” which is quieter than strumming, harmonically richer and more versatile. He plays on a narrow body guitar that produces almost no sound in its immediate physical environment. Therefore, by combining wireless technology with amplification, the whole of JOHN WARNER’s intricate performance subtleties can be seamlessly textured and blended in to complement the mood perfectly. Also, provided your venue is equipped with overhead speakers, this approach enables better control for a desirable volume to be maintained throughout.
The bottom line is that JOHN WARNER’s show is more dynamic and interactive than the average on stage performer but less intrusive than the traditional form of Minstrelsy.
Furthermore, regardless of your venue’s layout, there are no bad seats!

JOHN WARNER is a self-taught, bilingual, singing/guitarist born and raised in Canada. In addition to English and French, JOHN’s 400 song repertoire spans over 5 other languages: Spanish, Mandarin, Bahasa, Korean and Italian. Without the help of backing tracks or music/lyrics sheets, and through the magic of wireless technology, he performs, moving freely among all-ages international audiences, the songs that make up their current and past musical tapestries... In 10+ years of ongoing experience across the most prestigious Properties the Hospitality Industry has to offer Worldwide, JOHN WARNE ... R has proven himself to be an outstanding, versatile, professional musical host.