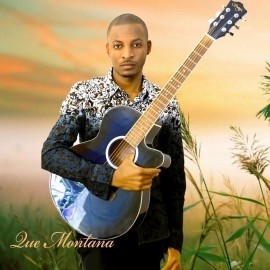 (no reviews)5.0
Country: Zimbabwe
Based In: Harare, Zimbabwe
From: Contact

Soloist singer who performs with an acoustic guitar and back tracks. His repertoire consists of original Afro Pop music, popular US and UK Pop covers and popular African covers
Request a Quote
Share this Page:
Report this profile

Africa has unleashed undoubtedly one of the most powerful forces to ever come out of the continent! Multi instrumentalist and afro pop maestro Que Montana is redefining the boundaries of African music and creating a new musical culture for future generations. The young maestro has given rise to a sublime, divine and perfectly mature musical culture that many his age would never contemplate achieving in several lifetimes. The suave nature of his music has enabled him to capture not only the zeitgeist of the new era, time and again he has proven that his music is timeless and intercontinental. ... His unique music style is filled with compelling and exuberant passion.

At the tender age of seven, Que Montana began his musical journey when he learnt to play the guitar and subsequently the piano, bass, keyboards as well as various other percussive instruments. Que Montana took time to nurture and sink his roots in the music industry by being mentored by some of Zimbabwe’s music legends as he played bass in their bands. He performed together with the likes of the late Andy Brown, Tanga Wekwa Sando, Afrika Revenge, Dudu Manhenga,Rozalla Miller (UK), Zangi(Zambia), Mpumalanga Gospel Expo (South Africa) just to mention a few. A music producer in his own right, ... Que Montana has also featured in numerous music projects that have topped the charts locally and internationally.
By the time Que Montana released his debut album entitled Neo Vector in 2005 his presence in the music industry had already been felt and celebrated by many. His first music project topped the local charts and immediately placed him on the list of top musicians in Zimbabwe. With his fan base increasing incredibly Que Montana went on to release yet another scorcher in 2007 entitled Sweet Pain. This was followed by another successful project entitled Untamed in 2010. With his vast experience and exposure it was no surprise when he began to collaborate with other amazing artists locally and international on his project entitled Strings Attached in 2012. On this project he featured artists like Willis Wataffi (Zim), Dadou Mansanga (D.R.C), Bruno Migliari (Brazil), David Chifunyise (Zim) and Kapella T Silva (Brazil). Que Montana’s music influence began to be felt in the region and he was signed by a South African music label CoolSpot where he released an amazing album with a fusion of African music and western classical music together with Lorien Murray entitled My Mzansi Experience. Que Montana also managed to release several other singles during his stay in South Africa as he worked with hitmaker producer Techno Beats from Tripple 9 studios. The young maestro returns this year to the Zimbabwean music industry as he drops his latest album entitled Sara Ugarike which is already make waves on social media.
Backed by a vibrant and energetic band Untamed, Que Montana has performed at many prestigious events and music festivals around the world. His amazing performances have not only thrilled many who have had the pleasure of watching him perform on stage but Que Montana has been a source of inspiration for many young people around the world. In 2009 Que Montana represented Zimbabwe in a project for SADC where he composed, produced and performed a song together with Zambian greats Mau Mwale and Chris Aka. He was also invited to perform for the former President of Zambia Dr Kenneth Kaunda and the event was broadcasted live on Zambian national tv ZNBC.
Que Montana is known to give exhilarating performances to suit any type of audience for both private and public events. He has made a name for himself performing at festivals, concerts, cocktail dinners, weddings, brand awareness campaigns, parties as well as in universities and colleges. He has also composed and produced soundtracks for films, documentaries, jingles and musicals. Currently signed by MUWOFO Music, the label has described Que Montana as a phenomenon ahead of time!